Otley Brewing Company were another one of those breweries I had heard of but never seen in the wild or found anywhere to buy them when on my travels. I a strange twist of fate our local pub had some in a few months ago and my dad tried it then told me about it, unfortunately by the time I got chance to visit the pub it had all gone. 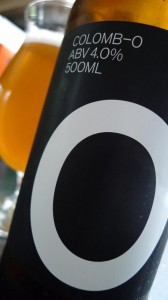 My dad being the sociable and generally chatty (read gobby) decided he would email Otley to say he had enjoyed their beer and that he would like to see more of it in this neck of the woods, along with some story from his childhood (which was a very long time ago). As a result Otley found my website and asked if I would like to try some of their ales….I snapped their hand off (you all know you would too), I also asked them if they would like to take part in the Meet the Brewer Feature which you can read here.

Sooner rather than later 3 bottles of Otley’s finest arrived and I decided to start with Colomb-o (or Columb-o depeding where you read).

As will all the Otley brews Colomb-o comes in a brown 500ml bottle with a very simple, yet stylish black label with a big white “O” on, this is complimented by the name of the beer in the top left corner and then a little bit of info on the back.

Colomb-o comes in at 4% ABV and is labelled as a very pale golden ale, which is packed full of hops, so that combined with the label had me drooling with anticipation.

It poured a lovely pale golden colour with a hint of haze that came from the beer being bottle conditioned. the head was pretty decent, nice and frothy with a slight cream tinge.

The aromas were herbal, grassy and hoppy, quite pronounced and I picked up a bit of yeast there too.

Flavour wise, it was quite light in the mouth, it was surprisingly fresh, the first thing I picked up wast a rush of moderate hops, followed by some malt and then a herb and zingy grapefruit fishing which was bitter and very moreish. Very tasty indeed.

If I had any criticisms they would be that it’s maybe a little bit thin and the hops maybe don’t quite deliver what you get on the nose, other than that it’s a great summer session beer and shows the sort of flavours you can pack in to a lower ABV beer. I am pretty sure that it would be even better on cask and may even suit being put in a keg for those hot summer days.