On Saturday I finally got to go to the Rat Race Ale House, It’s a short train journey up the road but I’ve never gotten round to jumping on the train. Until recently it couldn’t open when Hartlepool were playing at home. So on Saturday I jumped on the train with Trev and we headed straight for the pub. 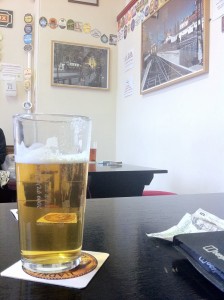 Crown HPA was in top condition

Rat Race Ale House is a tiny little pub on Hartlepool train station platform, There’s room for about 25 people in there at a push, it really is tiny. It only serves cask beer, wine and proper soft drinks along with some brilliant pork scratchings and crisps. Unlike most pub’s it doesn’t have a bar, you simply pick  a beer of the board and Pete disappears into the cellar and returns with your beer.

During our visit we sampled all of the beers that were on, we started with the Crown Brewery Hillsborough Pale Ale (HPA), which was light, refreshing, had bags of flavour and was is as good condition as I’ve ever had it. This was shortly followed by Otter Bright, a little stronger than the HPA, still in great condition and had a lovely bitter finish. Next up was Milestone Forest Gold, this one was more of of a golden copper colour than the other too, it wasn’t a bad beer but it wasn’t my favourite of the day, Although I think it was Trev’s favourite. 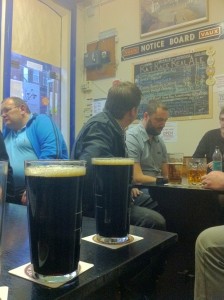 Black Jack Stout - a hit with the locals

We finished with Black Jack Stout from Crown, which came in at a 6% ABV, it was dark and roasty with hints of smokiness and hops coming through, best described as Stannington Stout on steroids it was a seriously good beer. Judging from the number of people buying it in pints or in the really handy 3.5 pint carry out bottles it was a big hit with almost everyone else.

Pete and his partner (sorry I can’t remember her name) we great hosts, we had a great bit of craic with them and the regulars, which I’m sure I will soon become, I will definitely be returning next week as Pete has promised me some  Thornbridge Halcyon, just another of the 189+ beers they have had since they opened, and if the beers have all been in the condition that the ones we tried then they are onto a winner.

If you are near Hartlepool or passing through then the Rat Race Ale House gets my vote for a place you really must visit.