This post has taken me a while to publish, not because I’ve been busy (even though I have), not because I’ve had other beer reviews to post (which I have) but due to the fact I couldn’t think of a fancy title, which I thought the beer deserved.

I was explaining the dilemma to a wise old man and he suggested simply putting “Pliny The Elder” as the title as it says it all, he wasn’t wrong! 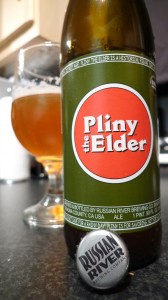 Pliny The Elder in all it's glory

The thing is Pliny doesn’t need a fancy title, any flashing lights or bells and whistles, the name and the beer says it all.

So without any further waffle, here it is…the star of the show….Pliny The Elder….

I was going to leave it at that but it would be rude of me not to fan the hype that this beer rightly receives, especially after Phil very kindly brought it all the way back from California for me.

Pliny has a reputation as being one of the best beers in the world, if you don’t believe me, check out the uber geeks over at ratebeer.com, so as you can imagine, I was really looking forward to trying it, at the same time I was also worried that it wouldn’t live up tho the hype.

Pliny was named after an author, naturalist and natural philosopher who was part of the group that created the botanical name for hops, you can read more about Pliny, or Gaius Plinius Secundus as he was also known here.

The first thing that strikes you about the beer is just how simple the label is, I really like it, the big red dot stands out a mile, on closer inspection there is more to the label than first meets the eye, for around the edge is an explanation of who Pliny The Elder was and that Pliny should not be aged, it should be drank fresh or not at all.

On opening the bottle I was greeted with a huge waft of hops, really fresh and buzzing around, desperate to be unleashed, there are slightly more subtle hints of citrus and floral notes. 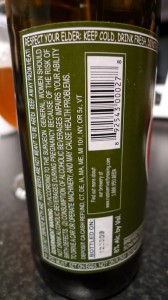 Pliny pours a lovely glowing golden colour, not to dissimilar to Thornbridge’s Halcyon, there is a slight haze, whether this was from not allowing it to settle after it’s long journey from California, via Kent, Sheffield and Leeds or whether this is a characteristic of the beer I’m not sure. The head was thin but lasted well down the glass,.

If the smell when you first open and pour the beer took my breath away the flavour and feel in the mouth knocked me into next week, It was absolutely jam packed with a lovely oily, resinous hop flavour and texture that I’ve never experienced before.  Once the hops disappear you are left with lovely pine, grass and citrus flavours fizzing around your tongue followed by a clean, dry finish that leaves you clambering for more, which at 8% ABV is quite dangerous, had I had any more of this I would have had to drink it there and then, instead I moved onto some usually great beers, which unfortunately after powerhouse that is Pliny The Elder, tasted, well, rather bland.

Pliny not only lives up to the hype it excels it, there are not enough superlatives to describe just how good it really is, I urge you to try and track some of this down, it won’t be cheap but it will be worth it, a big, sorry HUGE thanks, goes out to Phil for bringing this back for me, and to Mark D for playing beer mule and bringing it up to Sheffield for me.

Pliny The Elder is brewed by Russian River, you can find their website here You can view more photos of Pliny on my flickr account here.

PS Pliny is not for everyone,  I have found someone who didn’t like it, My long suffering beer widow, Emily, she said it tasted of grass and was pretty yukky, she much preferred a Raging Bitch, but that’s another story.