I’m just getting round to catching up on a few beers I’ve been sent over the last few months, Salopian very kindly sent me a couple of bottles that I drank a while back and just like Darwin’s Origin they gave me a real surprise.

According to the blurb, The creation of Oracle came about because of the employment of a new member of staff and a trip to a local pub. Jake Douglas joined the brewery in early 2008 having spent a decade at a brewery synonymous with hoppy beers; a promise was 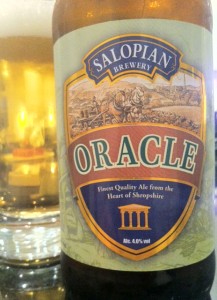 Another cracking beer from Salopian

early on to brew a beer to his taste. The trip to the pub was to try a beer of this style. The ambition was to create a balanced low gravity golden beer with a striking hop character. After a period of test brews Oracle was born.

It really did pack a punch for its bang on 4% ABV It’s quite dry and bitter and the grapefruit from the aroma is really pronounced, a little bit of sweetness comes in as the beer warms up so my tip is to drink it pretty cool, as this definitely shows off the hops a little bit more and creates a really great supping beer.

Its not over complicated, the hops and fruityness give it more than enough to keep just about any beer lover happy, and I can see a lot of people falling in love with this beer.

Along with Darwin’s Origin, Oracle is a cracking beer and one I would happily buy a case of and could see my self drinking on a regular basis.