Last night I went to the Saltaire meet the brewer evening at my local Weatherspoons,  On offer there were 5 different beers on offer and a chance to chat to Tony from Saltaire.

We arrived just after 19:30 and the pub was already quite busy, It looked as if quite a lot of people were trying the beers as I spotted a few groups with halves and the taster glasses. 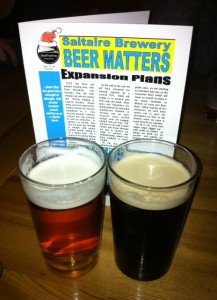 I headed straight for the bar, Tony was manning the pumps so I asked for a Cascadian Black for me and a Crystal Red for my other half.

The Cascadian Black is another beer that’s jumped on the Black IPA bandwagon, which I’m happy to see, unlike some of the punters who said an IPA can’t be black. It was silky smooth and smelled delicious, there was plenty of roast malt in the mouth and a lovely piney, grape-fruity taste, it had a medium bitterness to it and the glass was soon empty, personally I think its a great attempt at a Black IPA and packs a lot of punch for it’s modest 4.8% ABV (most of the Black IPA I’ve had of late has been over 7 or 8% ABV).

The Crystal Red, Was a lovely deep red colour, not to dissimilar to Hardknott Infra red, The taste on the other hand was completely different, this was less hoppy and had more sweet fudge and toffee flavours which were then backed up with a lovely hoppy undertone another cracking beer and very session-able at 4.4% ABV.

The other 3 beers on offer I’d drank on many occasions before and included one of my favourite beers of all time, Saltaire Cascade Pale Ale, It’s delightfully hopped with Cascade and Centennial hops giving it a zesty, flowery flavour which also came through on the nose, It has a lovely tart finish that lasts a decent while on the palette making it hard to put your glass down. 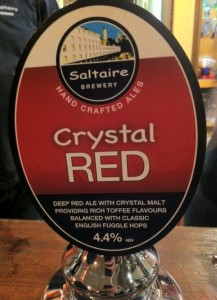 The Saltaire Blonde, is one that my other half loves, it was the palest of the beers on offer and the lowest of ABV’s, It has a nice spicy, biscuity flavour followed by a dry citrusy finish. Nice stuff.

Finally onto the Triple Chocoholic, which to be honest I prefferd in bottle, It didn’t seem as chocolatey or as rounded on cask, not a bad beer just not the best I’ve experienced it.

I was finding it hard to separate the Cascade Pale ale and the Cascadian Black as my favourite beer of the evening, so I did what another slightly intoxicated drinker would do, blended them, this unfortunately wasn’t a good idea as it muddled the flavours way to much  and produced a bit of a mess, unlike when mixing Marble Ginger and Marble Chocolate.

The next best solution was to get a glass of each and try to make a decision, In the end if pushed hard I’d probably go for the Cascadian Black, i just loved the roast, toasty flavours combined with the hops.

A great night was had by almost everyone I chatted to, Tony was in great form and certainly knows his beers, I was good to see that he had tried some of my favourite beers of late in the form of beers from Harknott and Kernel.

If you’ve not had Saltaire beers before then its definitely worth checking them out, you can buy their bottled beer from My Brewery Tap and you can find out more about Saltaire Brewery here