A couple of weeks ago I received an email asking if I was available to take part in the Sharp’s connoisseur choice cook off final, apparently the recipe I’d submitted on Sharp’s Facebook pagehad been chosen by 2 michelin star chef Nathan Outlaw to represent him in the final. It seemed like far too good of an opportunity to turn down so I put a couple of day’s holiday in, filled the car up with diesel and re read my recipe. 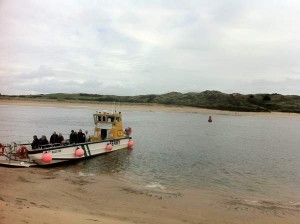 The ferry to Rock

I set off for Cornwall just after 5Am fuelled with coffee, toast and cereal ready for the 414 mile drive, the journey was broken up by a couple of stops at overpriced service stations with bad coffee and even worse food, I always seem to pick the worst of a bad bunch.

I arrived in Padstow with plenty of time to check into the hotel Sharp’s had very kindly put me up in. It was then I clicked it was one of the pubs we”d spend a few hours supping cask ale in whilst on honeymoon back in April, it was then that it sunk it how weird it was being there without the wife.

I had a quick walk round the quaint streets of Padstow to stretch my legs, it was a lot quieter than on my last visit, probably not surprising as last time was the run up to May Day.

It wasn’t long before I’d walked round the headland onto the beach to catch the ferry across to Rock to meet Ed from Sharp’s Brewery. Unfortunately Nathan couldn’t make the event so I was going to spend the afternoon in his kitchen with his head chef Chris. 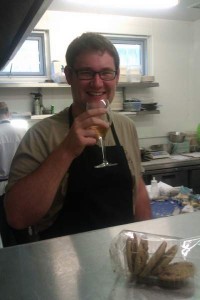 Enjoying a beer in Nathan’s kitchen

By this point I was more than a little nervous luckily Chris and his team soon put me at ease and had me behind the rather hot stove cooking my dish so they could show me how to improve it. It was amazing to see everyone working away preparing for the evening service with so much precision and speed, especially as the kitchen was tiny.  The other thing that struck me was just how much food they were preparing there were all sorts of yummy looking morsels being cooked, sliced and diced ready be devoured by hungry foodies that evening.

My recipe seemed to go down well with Chris and worked with the beer, Chris gave me a few pointers on everything from portion size (I’m from up north and don’t do dainty portions) to  adding a little bit of acidity to balance the flavours a little more. Before I knew it it was time to leave the kitchen and head over to Rick Stein’s Seafood school to meet the other contestants, chefs and prepare for the final cook off.

The other two mentor chef’s were Jack Stein and Alyn Williams, the other two contestants were Celina from Portsmouth food lovers and Karen from Lavender and Lovage both of whom were seriously into their food and had a huge array of ingredients and gadgets on their workstations.

The rest of the afternoon flew by and before long spectators and guests had started to arrive and we all had a beer in hand and were sampling the delicious canape’s that were on offer, I was then joined by Ian who was my mentor for the evening session and would be keeping a sharp eye on me and making sure I didn’t burn anything.

Ian keeping a sharp eye on me

As more people arrived and kick off neared I got a bit more nervous so decided to balance that with a couple of glasses of Single Brew Reserve, which was the beer I’d chosen to pair with my Haddock, Creamed leaks, Samphire and crayfish tails it’s a great afternoon supper, thirst quencher and works brilliantly with fish. Celeina and Karen had also both chosen this beer to pair with their dishes.

Once the whistle went and the cook off started time flew by, the next thing I knew the judges, including Stuart Howe, head brewer at Sharp’s were tucking into my dish, It was at this point I decided to move onto the Honey Spiced Tripel in my glass. The dish seemed to go down well and I could now stand back and relax while the judges tried the final dish.

Unfortunately for me, the judges chose Celina’s dish as the winner, although I have to agree with them it was stunning, the fish was great and the citrus sauce really and surprisingly worked with the beer, bringing out the citrus in the hops really well. The feedback I received from the judges was great they said the fish was cooked perfectly and they’d quite happily sit and eat a bowl of the sauce with a big hunk of bread, unfortunately I’d over seasoned the fish a little and put a touch too much cream in the sauce so after a while the fish got lost in the sauce…that won’t happen again!

My final dish with the beer

The rest of my time in the Seafood School was spent drinking the Quadrupel, chatting to people who’d come to watch, including one of my favourite chef’s Paul Ainsworth who introduced me to Arancini in his Rojano’s restaurant. After a few more glasses of beer and a few photo’s a group of us went back to the Old Ship Inn where we were staying  to sample some more of Sharp’s beers, in cask form this time and grab a bite to eat in he form of a huge burger, served medium and topped with a huge pile of Jalapeño, the perfect way to end a top day…or so I thought, we were soon joined by more the the local chef’s and things got a little messy.

I had a fantastic time, it was brilliant getting to spend time in Nathan’s kitchen and the Seafood School, A huge thanks goes out to the guys and girls at Sharp’s, the chefs and everyone at both the restaurant and Seafood School and to everyone else involved. Everyone was so helpful, friendly and happy to talk about almost everything, I feel like I’ve learned loads, not only about beer and food but about the people behind the beer and the food, who’d have thought that chef’s would like kebabs and cheese stings.

The whole idea behind the competition was to get more people thinking about food and beer and the Connoisseur’s choice beers really do provide a great place to get started. I really hope they do it again next year and that it gets a bit more coverage in the beery world as it seems that most people who had heard about the competition were from the foodie side of the river. 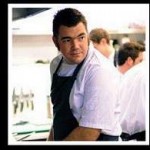 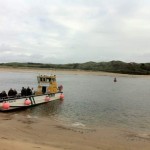 The ferry to Rock 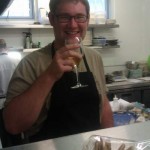 Enjoying a beer in Nathan’s kitchen 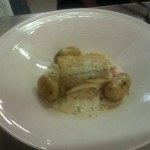 The dish I made in Nathan Outlaw’s kitchen 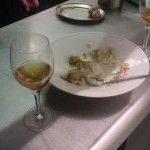 My dish demolished in Nathan’s Kitchen 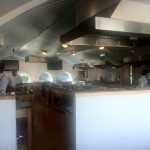 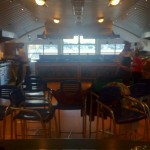 The view from my bench 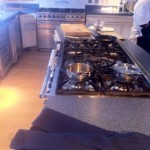 My bench for the final cook off 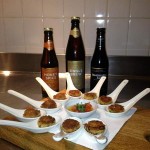 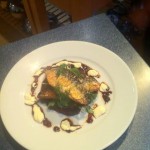 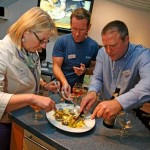 The judges tucking in 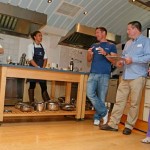 Stuart and Paul talking to Celina 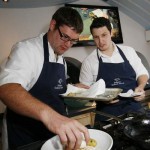 Me plating my dish up 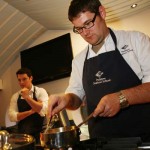 Ian keeping a sharp eye on me 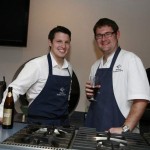 Ian and me, must have been later as I was on the Quad 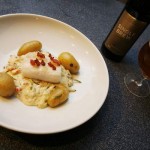 My final dish with the beer 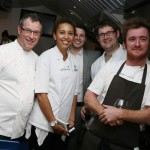 Alyn, Celina, Ian, me and jack. 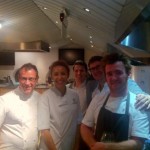 Alyn, Celina, ian, me, and Jack 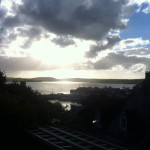 Padstow from the carpark 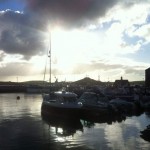