Just before Christmas the legendary gent that is Stuart Howe from Sharp’s (you may know him from the Hugh and Oz raise the bar program that was on the BBC or as the fella who made beer with offal) sent me a bottle of a beer that in his own words he described as SUBLIME and one that hurts to stop drinking! 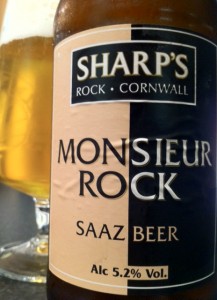 This beer was Monsieur Rock. Monsieur Rock is a 5.2% ABV, a limited edition beer brewed with Jean-Marie Rock from the outstanding Orval Brewery.

Monsieur Rock is brewed with Saaz Hops and fermented with Lager yeast and has been matured in cold tanks for two months, you can find out more here, the result is a beer that opens with a slight hiss then a waft of lemon peel as it’s poured into the glass. It pours a crystal clear light golden colour with a huge white head, the beautifully shaped San Miguel glass certainly helped with that (sorry Stuart I don’t have a Sharp’s or Orval Glass).

The aromas are subtle but there’s definitely some lemon peel, orange zest and maybe a hint of ginger in there, the body really surprised me, it was velvety smooth, it made me want to hold it in my mouth and let the flavours wash over my tongue, unfortunately I couldn’t resist and kept drinking.

The flavour was outstanding. It’s not over complicated, the orange and lemon are there thanks to the Saaz hops, there’s a light bitterness in the background and on the finish and there’s a hint of apricot and an almost herbal spice there too. I just couldn’t put the glass down and no sooner had I opened the bottle it was gone, apart for one sip that my other half tried, as much as I begrudged her that sip I couldn’t let her miss out.

It really is one of the most delicious and drinkable beers I have ever had, it fills your mouth with the tastes of spring and like Stuart said, hurts to stop drinking. I actually think it would make the perfect year round session beer,whether it be bottled, casked or kegged It would be my first choice tipple for any occasion.

I’m not sure if there are any plans to make more or if it really is a one off limited edition batch, I hope it’s not. In fact i’m off to order another case and I urge you to do the same, this one one beer (like the Marble V & V) that you don’t want to miss.

You can buy a case or two from here and you really really really should. You can also read the story behind Monsieur Rock on Stuart’s brilliant blog.

PS Emily if you are reading this, the case that arrives is all for me so don’t even think about drinking any of it.