Posted on June 28, 2013 by andyMogg in Shepherd Neame No Comments 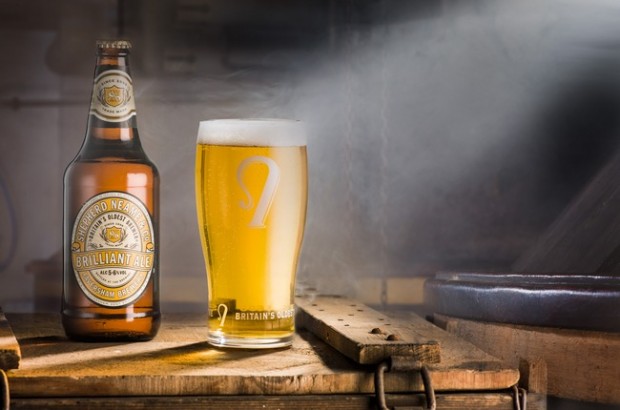 Shepherd Neame have been doing a great job of late with the release of their Classic Collection, including Generation Ale, India Pale Ale and Double Stout, all with new branding that has a lovely historical feel to it and (thankfully) steps away from the glossy labels and clear bottles of main Shepherd Neame range.

The latest in the line up is Brilliant Ale, a 5.6% pale ale which was apparently first brewed sometime between 1825 and 1855 and comes with a bit of a story which i’ve pasted below.

There is a legend at Shepherd Neame that Brilliant Ale was inspired by the vision of the bright early morning sun sending its golden shafts of light through the brewhouse window and onto the oak mash tun, inspiring the brewing team to brew a beer that echoed these hues.

Historically this recipe was formulated with 100% pale malt and was bittered by the brewery’s signature East Kent Goldings hops, resulting in a golden, brilliantly bright, hoppy ale which has risen Phoenix-like from the ashes of time for the modern drinker to enjoy.

Says head brewer Richard Frost, “According to brewery records, Brilliant Ale was first brewed sometime between 1825 and 1855, making it our oldest Classic Collection beer to date. Although we’ve rejuvenated it by using the modern hop variety Cascade, we’re staying true to the spirit of this great pale ale, which was hugely popular in its day.

“We’re very proud to be able to revitalise unique brews like Brilliant from bygone days to share with today’s beer drinkers. We’ll leave it to them to judge whether the brilliance of its colour is matched by its taste!”

It’s got a lot going for it, It’s certainly got that unmistakable Shepherd Neame flavour to it, that sweet toffee flavour that is present in most of their beers comes first followed by the slightly sharp grapefruit and citrus flavour which is almost enough to balance out the toffee

but could do with turning up a notch.

Brilliant ale is a really tasty beer…not sure I’d say it was brilliant, but it is blooming good, it’s just the sweetness that puts me off a little as I’m not a huge fan of sweeter beers.