Posted on March 14, 2014 by andyMogg in Beer Reviews, Sixpoint 6 Comments 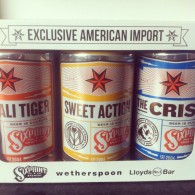 A little over a week ago Wetherspoons did something I never thought I’d see, they put American canned beer into my local pub, not only my local but every Wetherspoon Pub in the UK.

The cans are 3 beers from Sixpoint Brewery in Brooklyn and I was one of the lucky ones to  be sent a nice little pack with one of each can in.

I’ll admit I drank all 3 straight from the can too…that’s what canned beer is for right?

First up was The Crisp, a 5.4% Pilsner,  It wasn’t my favourite of the three but it was clean and crisp…pretty much what it said on the tin.

Next I cracked open the Sweet Action, it smelled quite sweet when I first opened the can, it the prominent taste is the sweet malt but it’s really creamy and there’s a few hops in there are give it a nice nectarine/peach flavour, it seemed to finish quite quickly but was extremely quaff-able, certainly one to have a couple of.

Last but not least was my pick of the bunch, Bengali Tiger, a proper piney, grapefruity IPA with plenty of hops, as soon as you open the can the resin just wafts out at you. Bitter but not too over the top, an absolute cracker, which i’ve since been back and bought more of. at 6.4% it’s the strongest of the 3 so you’d maybe not want to have too many but it’s such an easy beer to drink you might find your self having one more than you should.

The cans are beautifully designed, the detail is great, especially the barcode and at 2 for £5 they are keenly priced for canned American beer. I think you can also get them as part of the meal deal. I’m quite partial to the chilli hotdog with onion rings and I think Bengali Tiger would be perfect for that. 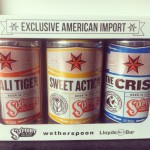 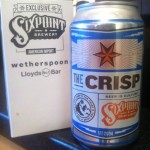 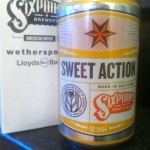 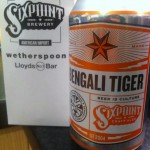 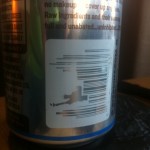 6 comments on “Sixpoint cans in Wetherspoons”