Posted on July 26, 2010 by andyMogg in Beer Stuff, Food and Recipes 1 Comment

I know this post doesn’t have beer in, nor does it have a proper picture, It does however involve a bottle of cider (including a very brief  “review” but I just had to share this recipe with you.

I saw it in a slow cooker book in the cheap bookshop in town so i thought id give it a go and make the gammon for sandwiches this week! it’s delicious and really simple 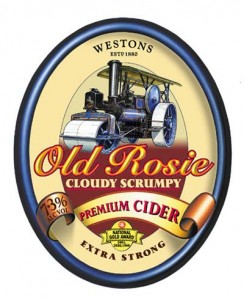 At 7.3% this could get you into a lot of trouble on a hot summers day

The recipe said to use 1.5 litres of cider but i didn’t think it would fit in my slow cooker so i used 500ml and a little bit of water to cover the meat, it also said to use 1 juniper berry and 1 stick of celery but i had neither so left them out.

The recipe also said to cook on low for 8 hours, I decided to cook it on medium for 2 hours then low for a further 6, mainly because I forgot to turn the cooker down as we always use it on medium, cooking time might also depend on the size of the joint you used. I think mine was just under 900g.

I chose to use Weston’s Old Rosie cider as it was the closest thing to proper cider the shop had and I didn’t really want to use any of that other fizzy bright orange stuff.

Old Rosie weigh’s in at 7.3% ABV and is a pale yellow colour, which even after you let it stand for a couple of days, is still pretty cloudy, It pours with virtually no head and isn’t highly carbonated. The aromas are as you would expect, lots of apple, a hint of sourness and some oak coming through from the barrel.  Flavour wise, it’s nice and sour with just a tiny bit of sweetness.

It was ridiculously refreshing and surprisingly drinkable, even when not chilled.  Unfortunately it only got a couple of sips as the rest had to go in the slow cooker.

And there you have it Gammon gooked in cider on a Beer Reviews website, what ever next?

Would you like to see more recipes that include beer and cider?? I’ve got plenty kicking about if people are interested!

One comment on “Slow cooked gammon in Old Rosie cider”