Something Extra Special From Adnams

I couple of weeks ago Fergus from Adnams sent me a couple of rather special bottles of beer. Until now i’ve not been able to talk about one of them so now the shackles are off I can spill the beans.

The first of the two beers was Adnams Extra, this once award winning beer fell off the radar for a few years but this year, in honour of Cask Ale Week, was ressurected. It’s not usually bottled but Fergus being the gent he is very kindly bottled some for me and a couple of other lucky bloggers.

The Second bottle was a trial bottle of something special he has been brewing, it comes in at around 10% ABV and had been maturing in open tanks for 4 months.

Both bottles came in lovely swing top bottles with neat hand written labels … more beer should come this way, especially stronger beers, as being able to re seal them is really handy.

I popped open the top on the Extra, it poured with a lovely deep copper colour with a decent head, considering it had been taken straight from the cask a few days prior. The aromas were herbal, floral and slightly hoppy.

It tasted lovely, there was a lovely bitter hoppy taste with some  juicy sweet fruit coming through along with a touch of malt, the herbal notes from the aroma were also present. This finish was long and dry with that lovely hop bitterness coming though. This was a real winner, it wasn’t quite as sweet and malty as some of their other beers and I really do hope they keep brewing it and hope that it makes it into their bottled range too. 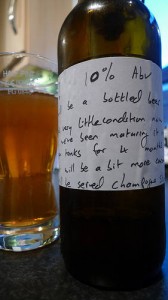 I decided to keep the second bottle to share with my brother who popped round later that evening, I popped that open and poured it into a couple of half pint glasses. There wasn’t much head and it was lacking conditioning and carbonation, but the aforementioned neatly handwritten label had warned of this.

The aromas were yeasty and boozy there were also notes of banana, interesting indeed.

The flavour was quite raw yet surprisingly drinkable, there were lots of yeasty esters and malty sweetness, there were just the faintest hints of hops . I couldn’t put my finger on the style of beer, it seemed somewhere between a wheat beer and an IPA, maybe a little bit like a amped up version of Crown Brewery’s Wheetie Bits.

I’ve got a feeling that once the beer is finished and has a bit more fizz and conditioning then this could be a fantastic drink to  share, serve well chilled and sup in the garden on a hot summers evening.  Nice one Fergus.

You can visit the Adnams website here, read Fergus’ blog here, follow him on twitter here, read his meet the brewer here and read my Adnams Beer Reviews here

2 comments on “Something Extra Special From Adnams”