When I spotted St Hellier Ginger Beer Shandy for 89p a bottle in Bargain Madness not for a second did I think I would be back a couple of days later buying a whole case of the stuff.

I’ve never really been a fan of St Hellier drinks I’ve tried over the year, so much so I’ve never actually bought any, just tried sips of other peoples drinks, as you do. Add to that when I saw the price of the normal St Hellier Beer Shandy in Morrisons, no matter how much I wanted to give it a chance I wasn’t paying nearly £2 for a bottle of shandy. 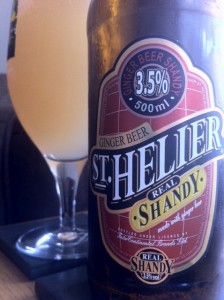 So that fateful Saturday morning, when I spotted the Ginger Beer Shandy on the shelves of Bargain Madness, I thought what the heck, lets give it a go, it’s  a bargain after all.

The Ginger Beer Shandy comes in at 3.5% which is a fair old ABV for a shandy, It’s apparently made with 1/3 ginger beer 2/3rds lager. It pours with a really good head and nice and cloudy, just like a proper ginger beer. It smells slightly sweet and sticky, almost like ginger cake. In the mouth its spicy and really herbal with just a bit of syrupy sweetness coming through, the ginger bite is huge, fiery and slightly bitter, It’s very much a boozy version of Old Jamaica Ginger Ale.

It leaves a slight burn in your throat as it goes down, this builds up as you drink more of it, as does the sweetness, but it’s never too sickly or sweet.

Someone suggested I try it over ice, I suggested they the buggered off, I’m not sure why the sudden trend for sticking ice in everything has taken off but you won’t catch me taking part any time soon, unless of course it’s a Mojito or Gin and Tonic on a hot summers day.

If Bargain Madness keep selling this for 89p a bottle I will be present in my fridge all summer long. If you have a store near you I’d think about checking it out as you never know what you might find, It wasn’t that long ago I was getting Sierra Nevada Celebration Ale from mine.