Posted on February 19, 2014 by andyMogg in Food and Recipes, Hawkshead Brewery 1 Comment

Hawkshead very kindly sent me 3 of their new smaller batch beers, the IPA didn’t last very long at all and it certainly was a cracker, packed full of big juicy hops and ever so moreish, enough so that I bought a couple of bottles from Open All Hours in Keswick as the Hawkshead online shop had them at just under £30 for  6 delivered with no option to order more and save on postage which I thought was a touch pricey.

This left me with the Dry Stone Stout and the Brodies Prime Export, which I stashed out of the way for a cold day with some nice comforting food.

As it happens this day was Sunday, I’d decided to do a slow cooked steak in ale pie with some Stilton to use up what I had left in the fridge and when routing around in the beer cupboard for a bottle of stout I couldn’t find any, then I remembered I’d put the Hawskhead beers in with my bottles of stronger stuff. So out came both bottles, one to cook the steak in and one to serve with the finished pie.

The result was a complete success and the beers worked perfectly in tandem, I will admit to sneaking half a glass of the stout and replacing it with water in the recipe but I couldn’t cook with it not having tried it on it’s own.

The Dry Stone stout was a cracking stout, not to heavy, not too fizzy and with enough flavour to keep me interested, it almost seemed a shame to be using it in a pie but as it was the only bottle of stout I had left it had to be sacrificed, so I cracked open the Brodies Prime Export, an 8.5% ABV version of their original ruby ale, bigger boozier and fruitier than it’s smaller brother, an absolute winner.

The pie is really easy and super tasty, it’s even better if you make the filling in a slow cooker and cook for 6 hours so the meat is meltingly soft. 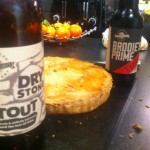 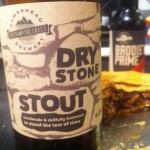 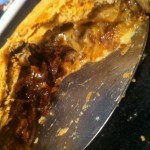