Following up from the £1 Ale Taste Challenge a few weeks ago I thought I would let you in on some of the ales i have been buying from the supermarkets over the week or two, not only have I found some absolute crackers I have manged to try/buy quite a few new ales.

I have really been surprised at some of the ales you can in the “bargain” shops, they seem to be selling an awful lot of ale these days – mostly pretty decent stuff with the odd cracker thrown in, some of them even have long BB Dates, this has lead to a rather full and over flowing beer cupboard

No doubt i will post full reviews of each ale over the coming weeks but here is a quick rundown of some of the bargains: 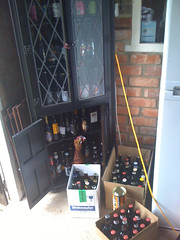 On a more general supermarket note:

Sainsburys have just finished there 2009 Beer competition so have lots of new ales in, plus their bigger stores tend to stock some great beers anwyay.

Tesco have also got their hands on some great beers from the likes of Flying Dog, Brewdog, Wylam and Hambleton – especially if you are lucky enough to have a big Tesco with the beers of the world section.

Morrisons and Asda also had a rather large selection of £1 ales mainly from the larger brewies such as Wychwood and Shepherds Neame. My local Asda even has a local beer section with 2 or 3 beers from the local area in.

Netto had a good range of Wychwood,  Shepherds Neame and Moorhouses plus a few others including their birthay beer.

Home bargains – Thwaites, Okells, Theakstons and a couple of other bottles including a few lagers and pilsners

Bargain Madness (B &M) – Barnsley Beers – cheap but not great (see review),Celebration, Leffe, Wychwood, Speckled hen, Theakstons and quite a few more including a couple of Cornish beers and some lagers.

I’ve not been in Aldi for a while but they quite often have some of their own brand beers plus a few Wychwood ones.

What is obvious is that the shops are starting to sell more and more ales, not always the best ones but hopefully if people by enough of them they will start to stock more.

If you are interested in what is on offer in the supermarkets then check out http://theormskirkbaron.blogspot.com/ as he keeps that pretty much up to date.