The Big Beer Fest – The Aftermath

I’m sat here, writing this with a slightly very fuzzy head, which can only mean one thing: there was plenty of great beer at the Big Beer Fest in Middlesbrough last night (or Saturday night if I don’t publish this until Monday).

The festival was in aid of Teesside Hospice and was the first beer festival in Middlesbrough for quite some time (you can read more about it here) and in order to do our bit we made sure we were there for when the door opened, there was already a que forming too which is always a good sign. 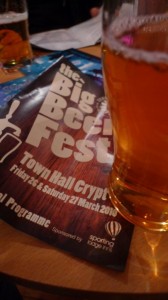 We were greeted by the very friendly festival staff who gave us our pint glass and complimentary drink ticket and then ushered us towards the ticket desk so we could buy more beer tickets. The tickets were £1 per half or £2 for a pint. We settled on a handful of tickets for halves, grabbed a table and headed to the bar. I’ve been to the Crypt in the Town Hall many a time but never for a Beer Festival, It’s a great location, it has lots of space and some interesting architecture.

We were pleasantly surprised at the number of ales that were still on, especially after our Saltburn Beer Festival experience earlier in the year, it turned out that all the Cider had sold out along with only one of the beers, the Sarah Hughes Dark Ruby, which was, as it happens the strongest beer on the list…although I was a little gutted as that was on my beers to try list. 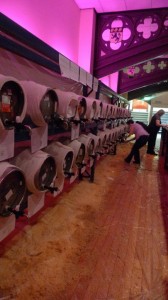 The beers all lined up waiting to be supped

I ended up plumping for (a rather large) half a Roosters Yankee, one of my favourite local brews, pale, hoppy, slightly bitter with bags of fruit, the perfect way to start the night. That soon dissapeared and I was onto my next beer, Salamander ‘s Mudpuppy – another light golden, hoppy number that was oh so easy to drink, this was swiftly followed by more and more of the great selection of light ales on offer, one of the best being the Elland Beyond The Pale which was packed full of floral hops and had a lovely bitter finish, before upping the game and turning to the darker more roasted and malty  drinks like Leeds Midnight Bell, Durham Black Velvet and Evensong.

Both the Durham ales were fantastic, as they usually are and are a safe bet at any festival, the Mordue Workie ticket was also it’s good old dependable self (no North Eastern festival is complete without Workie Ticket) the Titanic Lifeboat and Wylam Norther Kite were also pretty tasty…in fact we manage to sup most of the list and there were maybe only 2 or 3 that I wasn’t keen on.

I think my beer of the festival probably goes to Salamander’s Mudpuppy or Durham’s Evensong.

As the evening wore on and the entertainment came and went, the halves got bigger, I switched back to the lighter ales again, there was also a brief break in the drinking for a pie of some description, I remember it being mostly pastry but it was a welcome lining for my stomach and the mushy peas were ace!

As I’ve mentioned the entertainment I guess I should talk about them, there were 2 bands on – the first were 3 Foot Ninja, who are a local band, I had heard great things about them but I wasn’t too impressed, the second act, The Source started off quite slowly but got better as the set went on, definitely a band to look out for again. 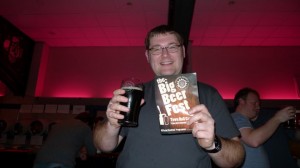 The bar staff were generous with their halve's

The staff were all fantastic, up for a laugh and were very generous with their measures…probably shouldn’t say that as don’t want to get them into trouble ;o)

The majority of the beers were well kept and were at a great temperature, the staff were also pretty good at spotting when a beer was coming to the end of its barrel.

My only slight concern was the lack of stronger ales, the 2 strongest being Blacksheep Rigwelter and the Sarah Hughes Dark Ruby, personally I would have loved to have seen a couple of 7 or 8% ales on there and maybe a couple of beers from someone like Marble, Crown or Thornbridge, even if they were in bottles, just to liven the line up a little bit, but all that considered for a first attempt it was a bloody good one so hats off to Teesside Hospice, I just hope the money they made was as big as the effort they put in.

All in all I think a great time was had by everyone and I can’t wait for the next one.

7 comments on “The Big Beer Fest – The Aftermath”