The Golden Pints – My awards go to..

Last week together with Mark’s Dredge (from pencil and spoon) and Fletcher (from real ale reviews) we launched the Golden Pint Awards (not the new jazzy logo thanks to robsterowski) so I thought it was about time I filled in the categories my self, It’s taken me ages to decide on some of the categories and I still can’t decide if I have made the right choice, 2009 has been a great year for new beers and breweries, I’ve discovered lots of new ones, re-visited some of the breweries and beers that I have loved and loathed, oh and made a bunch of great friends along the way.

You will notice there a lot of runners up, they are the ones that were there or there abouts for an award, There are also lots of beers that are missing but I just couldn’t squeeze them in.So without further ado I give you my Golden Pint 2009 Award Winners: 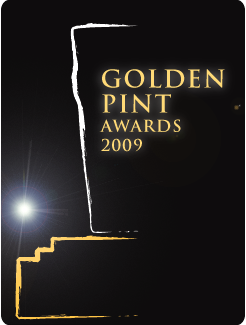 Pub/Bar of the Year: The New Inn Cropton – Great beer, lovely food and some great walks nearby (Runners up: The Lion Inn at Blakey Ridge, Dog and Gun, Keswick and The George Inn, Keswick)

Beer Festival of the Year:  Even though I didn’t go it has to be the GBBF (Runner up: Captain Cook Inn, Staithes for there various beer fests during the year)

Independent Retailer of the Year: Beer Ritz, Leeds (Runners up: The bottle, York and Open All Hours, Keswick)

Online Retailer of the Year: Beer Merchants (Runner up: My brewery tap for their 52 week beer club)

Best Beer Book: Hops and Glory by Pete Brown (Runner up: An Appetite for Ale)

Food and Beer Pairing of the Year: @Ginsoak ‘s Pic-Ale-Chilli with cheese and crackers and Thornbridge Halcyon. (Runner up: Wasabi peas)

Next Year I’d Most Like To… Complete the Coast 2 Coast, having drank lots of great beer along the way. I would also like to try a new beer from each continent or maybe even country.

Special Note: I would also like to say a big thanks to @crownbrewerstu for putting up with me for the day and letting me help him brew Ring of Fire 2009 as it was a great day, Thanks to Saints and Sinners for making the awesome Insomniac which would have won an award had it been available to buy and finally a big thanks to all the great people who have commented on here, chatted on twitter or sent me beer, you’ve all (well mostly all) been great!

PS if you wan’t to nominate your golden pints then feel free to do so below!