Posted on August 29, 2011 by andyMogg in Festivals 6 Comments

I’ve just realised that it’s now nearly a month since the Great British Beer Festival (GBBF) at Earls Court and then realised that I’d not written about it, party because I’ve been so busy since getting back but mainly because It was such a whirlwind of a day that I no matter what I write I will miss some of the great beers that were enjoyed in great company. 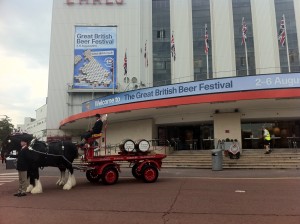 For me that’s THE most important thing about GBBF, It’s about meeting up drinking beer and having a great time, the only downside is that there are so many great beers and so many friendly, interesting people that after the first 3 hours I was not only rather light headed and boiling hot I was also completely shattered.

I really should have learnt my lesson from last year as I once again found my self starting on a stronger beer than I should, in this case it was Ballast Point Habanero Sclupin IPA, It was 7% ABV and packed full of really hot chilli, totally unbalanced and not something I really want to drink again and certainly not the best idea I’ve had for a first beer at t festival, but a beer that I couldn’t resit.

Stupidly that didn’t put me off the other beers with Chilli in, the best one definitely being Hot and Spicy from De Molen, It  was dark, smoky, had plenty of chocolate and coffee and then a not too hot or overpowering hint of chilli, pretty much the perfect chilli beer and the best one I’ve ever had….or at least that’s what the scribbles in my GBBF beer list say.

The same scribblings mention a wide range of beer from around the world and I’m proud to say plenty from the UK, I definitely drank more UK beer this year than last. I also drank way more Pilsners, mainly due to the heat but also the quality of the beers available.

I’m not going to list and analyse the beers, I’m far too lazy and didn’t make many notes as was too busy having a laugh. I will however say the hi-lights other than those mentioned above were (in no particular order) 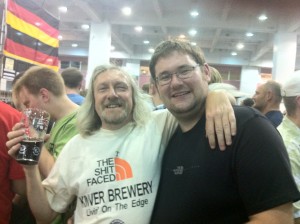 The pork scratchings and food were on top form again too and hats off to Reluctant Scooper for brightening my day with his ginger merkin, the Guys from Kinver Brewery for their brilliant t-shirts and to everyone that I met on the day.

It should be interesting to see the change of venue for next year, I felt that Earls Court was way to hot this year and it was one of the reasons I left earlier and headed off to the Cask Pub and Kitchen, where things got a little crazier, involving Magic Rock Human Cannonball, Kernel beers and various other tasty but quite pricey treats, not sure I will ever get used to London prices.

Oh and I hope that those of you that tried the Vindaloo Mix recovered to fight another day. (Thanks  @Beerymatt + @Mrsbeerymat)

The Wednesday was spent trying to keep cool and not spend too much money, hard when there are so many great places to eat and drink, The Darkstar Hophead in the Harp was in great nick until a wasp decided to drown it’s self in the last couple of mouth fulls. The Mikkeller in Craft Beer Co was delicious and the Mexican food in Wahaca was simply amazing