Posted on October 20, 2010 by andyMogg in Beer Reviews, The Kernel 3 Comments

The Kernel Brewery were a brewery I first found out about via twitter and Phil from Beermerchants. I’ve since become hooked on their delicious range of beers, so much so that I can’t belive I’ve not written about them before now.

The Simco IPA as the name suggests is a single hopped IPA using the wonderful Simcoe hop, It pours a lovely clear, bright golden orange colour with a tight white head, the aromas aren’t huge but it smells really juicy and fruity, slightly sweet, floral and zesty, hiding any sign of its whopping 7.9% ABV. 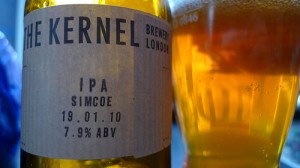 It feels really silky in the mouth theres loads of piney, flowery hops with a lovely nutty malty backbone which lead to a crisp almost dry aftertaste, Like the aroma the flavour hid the strenght really well, making it brilliantly drinkable for a strong, hoppy beer.

The thing that impressed me most was the balance of the beer, I was expecting the beer to be a lot sweeter, especailly from the aroma, but no the sweetness was balanced out by the bitterness and juiciness of the hops….Excellent stuff.

Kernel are definately one of the brewers to watch, hopefully Evin will fill in the Meet the Brewer feature when he gets a minuite or two in his rather hectic brewing schedule.

Kernel are based in London and are another one of the brewers that are part of the London Brewers Alliance, you can visit their website here, follow them on twitter here or buy their beers from Beermerchants here.