Posted on May 28, 2011 by andyMogg in Beer Stuff, The Old Mill Brewery 1 Comment

As I write this I’m sat on a mini bus, swaithed I’m blue florescent light, on the way home from the Old Mill Brewery in Snaith, Yorkshire. 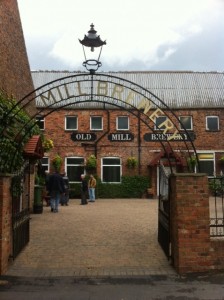 Lovely entrance to the brewery

I’ll be honest, before I was asked if I wanted to join my dad and his colleagues on this trip I’d not even heard of this place. But now I’m glad I have.

On arrival at the brewery tap we had a short walk to the brewery, through lovely old iron arch way.

We were warmly welcomed by the head brewer, Kevin who was very passionate and knowledgeable about his beer and it was nice to get a tour from a brewer as a few of the breweries I’ve been to lately there’s not been a brewer in sight.

We were given a brief history of the building It seems that over the years it’s been used for a huge array of things until it was converted into a brewery in 1983.

The brew kit looked really impressive, the size of the brewery surprised me, it was a lot bigger than I thought it would be and they’d obviously thought about how to make it easier to use and more efficient and some of the kit had some great little tweaks to make the brewers lives easier, Which from what Kevin was saying is a godsend at the moment as they seem to be really busy and have just won a couple of large contracts. 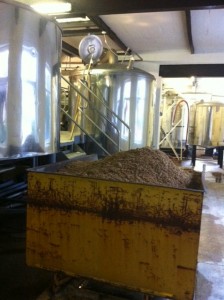 Someone had to dig all this out the mashtun.

As great as the tour was I was gagging for a beer so it was a great relief when we got to the little bar at the back of the brewery, it was well decorated and lovely and cosy, it even had a glass panel in the floor which went down into the old well. First up I went for a pint of Old Curiosity a 4.5% ABV dark bitter. It poured a lovely dark copper colour with a huge head, it was crystal clear (although they did say they using finings so the beers weren’t suitable for veggies) It was big and roasty up front with a little bit of dried fruit and raisin followed by a little bit of bitterness that left the finish quite dry yet still really smooth. 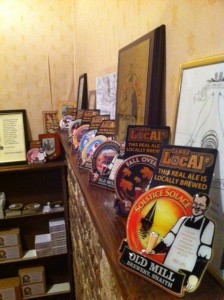 some of the seasonal pumpclips

Next up was the Old Mill Bitter, on reflection this would have been a better beer to start with as it wasn’t quite as full of flavour as the Old Curiosity although it did have a bit more hop character and a little bit more of a zing to it.

After that I managed to sneak a glass of the Willow’s Wood, the Old Mill’s seasonal beer for May, this was my favourite of the night so far it had plenty of bitterness as well as some citrus and went down an absolute treat.

After a few more beers in the bar we headed back across to the brewery tap pub, the Brewers Arms, they had a great range of the Old Mill beers on as you’d expect and I went straight for the blonde bombshell, it was light, slightly grassy, a little bit wheaty and then slightly sweet, very drinkable. This was paired up with an excellent hog roast bun with all the trimmings and a handful of chips.

Next up was a pint of their Yorkshire Porter, It was a lot lighter in colour than I thought it 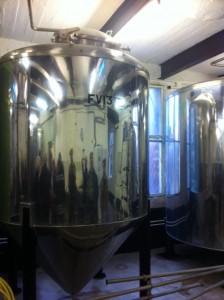 might be but it had a really moreish roast chocolate malt flavour that reminded me a little of chocolate spread on toast, like the Blonde Bombshell it was a little bit sweet at the end but that didn’t take anything away from the beer, the perfect beer to end the night with before hopping back into the seat which I’m now sat.

All the beers were good, solid, tasty beers that I would happily drink again, I’d also love to pop back and try the new dry hopped beer they are working on and some of the beers they are using some American hops in because if they are as well made as the beers I’ve just had then they will be terrific.

Oh one final thing, the pumpclips…I thought they were fantastic, each one had the tasting notes on the brewers apron and the pint he was holding represented the colour of the beer that you were about to drink…great for making a snap decision at the bar.