Posted on February 21, 2011 by andyMogg in Beer News, Festivals 1 Comment

As well as Twissup and the Otley brewery night at the White Horse, this weekend sees the start of the Welsh beer festival at The Rake in London.

It Kicks off at 12 noon on the Sunday and there will be a Meet the Brewer event at 2pm with Nick & Matt Otley & If you’re lucky Glyn will be there too as he helped brew the latest batch of  Motley Brew again! 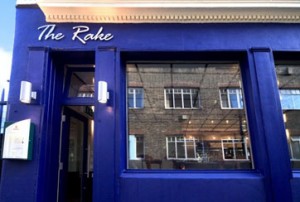 The Rake, small but perfectly formed.

Over the festival 18 Different Breweries, including Otley, Waen, Breconshire, Montys, Bullmastiff & Purple Moose  are being showcased with 37 different beers in Cask and Keg (mainly cask). There will also be a couple of draught ciders available for those who like fermented apple juice!

Mootown will be supplying Welsh cheese some cheese plates and they will have the usual array of bar snacks available.

Most of the beers are NOT usually available in London and the Rake have found a couple of new micro/craft brewers who have sprung up recently and started making a name for themselves inside Wales.

All in all this range shows just how versatile Welsh brewing has become in the last couple of years. It really is amazing that the scene is so vibrant that Brains hasn’t got a look in for the 3rd year on the spin.