Posted on February 4, 2011 by andyMogg in Beer Stuff 4 Comments

I said last week that I was going to try and blog about something different on a Friday for a bit, I’ve got a couple of posts lined up, well this week is something I’ve not done before and something that Scoop has been trying to get me to take part in for a while, The Session, from what I gather the session is where beer bloggers from around the world write a blog post about the same beery topic. This month’s is Cask, Keg, Can or bottle. So here goes. 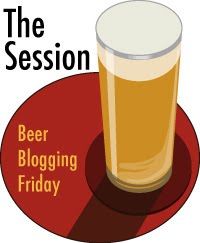 The method of dispensing beer has been a hot topic of discussion for as long as I can remember, it seems there is a camp for bottles, one for cans one for cask beer and one for kegged beer. Each will give you at least a 10 point list of why their favourite method of storing and pouring a beer is best, each one of them will have some very valid points and some that are complete and utter tosh.

To be brutally honest I think all 4 methods have their time and place and suit different beers and different occasions.

For me great beer in cans would be great for summer wild camping and hiking trips, lugging 500ml bottles of beer around is not only heavy but also takes up valuable space in my rucksack alongside my tent, they don’t pack down when empty so are a pain in the bum when carrying them out from where ever we have been, however I don’t think can’s have the sense of occasion of a bottle and UK brewers seem to be reluctant to put their beer in cans, whether its because of expense, tradition or something completely different.

Bottles, have more character, they come in a vast array of shapes and sizes, with a huge number of labels and capping methods. They are a bit more of a pain to store and carry the risk of the beer being ruined by light or changes in temperature, but there is just something about selecting your favourite bottle opener and carefully prising the cap off, the hiss followed by the rush of the aroma of the beer as you pour it into your glass. As for bottle conditioned or pasteurised that’s a topic for another day.

Cask vs Keg is a topic that’s been rumbling on a lot of late, recently Thornbridge posted a picture of cask and keg Jaipur on their Facebook wall which prompted all sorts of replies from people. Many of these were based on nothing but tradition, lots of people hadn’t tried kegged Jaipur and weren’t willing to give it a chance, tradition is all well and good but don’t knock something until you have tried it. Don’t get me wrong, I love hand pulled cask beer, but it’s too hit and miss, it’s a bugger to keep in the right conditions and this can ultimately lead to a terrible pint. If kegged beer solves this then it’s got to be the way forward, unfortunately until kegged beer becomes more widespread in the UK we won’t know if it makes enough of a difference to convince the doubters.

But and it’s a but of J-lo sized proportions, the key thing for me is does it really matter if the beer is at it’s best and doesn’t suffer from the method of storage or how it’s dispensed, personally if a beer tastes better from a cask then so be it, I’m happy to drink it however it comes providing it’s at its very best but at the end of the day if you start with a crap beer you’ll get a crap beer as the end product no matter how it’s dispensed.