Last year I was lucky enough to get my hands on a box of Thornbridge’s marvellous Halcyon for the bargain price of £1 a bottle, After that Halcyon was hard to track down and disappeared from my life. That was until Rich from My Brewery Tap very kindly sent me a bottle of the new batch.

The bottle had had a bit of a facelift (along with the other bottles in the Thornbridge range) It was now in a taller, slimmer bottle and had a new shinier and funkier label. The label now features Flora the Goddess of flowers, a statue of whom sits in the Italian gardens in the grounds of Thornbridge Hall. 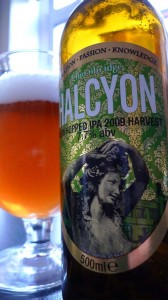 It pours a lovely glowy golden colour, much like before, although there was a bit more loose sediment, so if that puts you off just let the bottle settle for a few days after delivery and then pour nice and carefully.

The head was thick and bubbly giving off bags of fruit in the aromas, pineapple, passion fruit, mango and some grape.  The flavour is just mental, it’s as good if not better than the 2008 harvest, the fruit really comes through along with stacks of citrus and pithy hops, It’s chewy without being too over the top.

The bitterness is fantastic, it’s not so bitter it makes your face screw up but it’s powerful enough to take you back a bit for the first few sips. the ABV is well hidden with just hints of booze coming through along with a tiny bit of yeast.

It truly is one of the best IPAs in the world, It really shows what the Britrewing scene can do (all be it with a bit of help from a Kiwi and an Italian) it’s been written about so much, (partly why this has taken so long for me to post) and praised heavily, and rightly so, this is one damn fine beer. It’s certainly one be be drank fresh and I really do hope to come across it on cask at some point in the very near future, every time I’ve heard about a cask here or a cask there I’ve been unable to track it down for one reason or another, soon my day will come.

Oh and I would like to take this opportunity to congratulate Stefano on his UK Brewer of the year award!!!