This is one of those beers you that if you read the various blogs and tweets then you will no doubt have seen, well you are in for yet more about it as it is just too good a beer to leave off any self respecting beer blog.

Jaipur is brewed buy those very clever guys over at Thornbridge (who also brew one of my fave beers – Bracia )weighs in at 5.9% ABV which isn’t quite as strong as it’s big brother Halcyon, It is also that well known and consumed in some parts of the country, it has it’s own terms – Jaipured – Drunk or intoxicated due to drinking Jaipur and Jaipoorly – how you feel the next day after you have been Jaipured.

My first encounter of the legendary Jaipur was in a bottle (which I bought from Beermerchants), it cost a not to pricey £2.10 for a 330ml bottle.

The label is pretty cool and stands out well, although I believe this has all changed as they are undergoing a bit of a re branding at the moment. 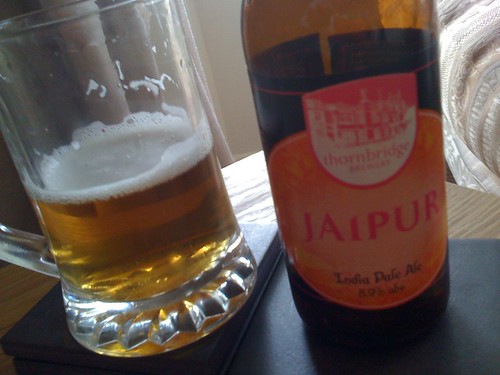 The beer pours with a satisfying fizz leaving a lovely bubbly white head sitting on top of a luscious pale golden ale. The aromas that start to waft towards you are very faint, but they are of herbs, mixed fruit and hops.

The first sip didn’t blow me away, possibly because I was expecting a huge hitter like Halycon or maybe it was a bit too cold, I left it to warm up a little for a few minutes and then it hit me, The tropical fruit and grass part ways and the hops fizz and bounce around your mouth, well balanced, not too hoppy and not to fruity, light and refreshing and just how you would expect it to be, it’s not as strong, complex or powerful as it’s big brother Halcyon but I had soon polished the bottle off and was left wanting more….

The next chance I got to try Jaipur was in Weatherspoons of all places, I had heard on the grapevine they had it on so quickly organised to meet a few friends in there with the hope of sampling a pint or two.

Now this is where the revelation happened, I realised that cask Jaipur was a different beast all together, it some how tasted stronger more full of flavour but the pint glass let the aromas come to the fore and enhance the whole drinking experience, being on cask also meant that we could have as much as we wanted, which lead to me getting a little bit Jaipured.

I couldn’t believe it was only £1.79p a pint (50p less if you have your CAMRA vouchers), that makes it £1.20 cheaper than a pint of Stella, Personally in cask form I think it comes pretty close to being the perfect pub pint, even at nearly 6% it’s light and refreshing enough to drink all night long!

If you ever see Jaipur in any shape or form them please do buy it as it really is that good, hopefully I won’t be disappointed at the weekend when I should hopefully get to try Halycon at the local beer festival.