Posted on November 15, 2012 by andyMogg in Beer Stuff, Truefitt Brewing Company No Comments

When Matt from Truefitt brewing asked for people to go give him a hand brewing a special double india pale ale for his 50th brew there was no way I was going to miss it, even if I had drank far to much gin the night before.

We arrived at the brewery just before 8am and Matt had already mashed in so we’d missed a bit of the hard work at least.

First thing on the agenda was a cuppa while Matt worked on the calculations for the hop additions, we were using a big bag of Dr Rudi hops which smelled absolutely delicious but quite delicate o the plan was to add most of them as late additions.

No sooner had we supped our tea it was time to dig out the mash, how Matt does this ever brew I don’t know…not because it’s hot and steamy but because unlike most mash tuns, his is tall and skinny so there’s no easy way to dig it out. 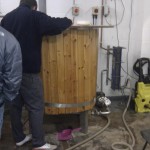 Putting the hops in 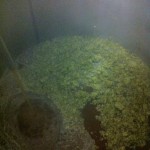 Mash dug and shifted outside ready for it’s trip to the local farm for the piggies, it was time for another cuppa and a bacon buttie while the wort came up to temperature.

It was then time to add the hops a whole 5kg of Dr Rudi, well nearly, 100g may have gone missing for my next home brew.

The hops were added at different intervals, I didn’t note which but the majority went in late in the hope we’d get as much favour as possible from them.

Once the hops had been added the brew was then cooled and transferred before the yeast was pitched and left to do it’s thing.

It was then time for us to help clean up, dig out the hops from the copper and have a couple of beers to celebrate.

The beer has been named Truefitt Trembler, is 7.4% ABV and has just gone into cask so I’m hoping for a taste very soon we’ve just designed the pump clip at work, so look out for it or check out the Truefitt Facebook page for more info on where to get it. 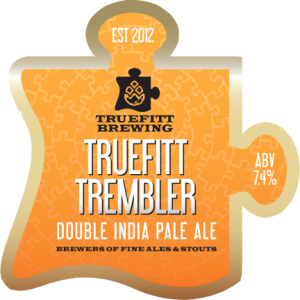