It was the Sunday after Twissup does Burton Upon Trent and it was time for me to head home, fortunately my train ticket said I had to go via Sheffield so I had arranged to meet brewers extraordinaire Stuart from Crown Brewery and Kelly Ryan from Thornbridge along with the legend that Reluctant Scooper, we were also joined by Matthew from Thornbridge and Yan from The Sheffield Tap, which is funnily enough where we were sat drinking, chewing the fat and putting the world to rights. 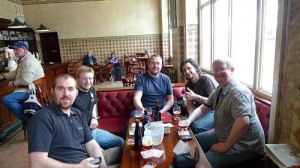 Before things got too heavy..

For me it was meant to be a quick stop off for a pint on the way back up north, but one thing lead to another and I ended up spending the day there.

We worked out way through many of the great beers the tap has to offer,  including Thornbridge Jaipur, Meantime IPA, Thornbridge Wild Swan,Thornbridge St Petersburg, Thornbridge Raven, Sierra Nevada Pale Ale, All of the Moor beers (Half & Half, Millys, Northern Star, JJJ IPA, Old Freddy Walker, Hoppiness, Somerland Gold, Ported Peat Porter, Peat Porter, Merlins Magic and Revival)  from the various taps and hand pulls situated on the huge bar. We also got a quick tour of the cold room where Yan stores all his precious wares, including a rather impressive range of bottles and glasses. It was here when Stu spotted a keg of Sierra Nevada BigFoot Ale that things really started to get a little messy.

Some of the beer we had already drank wasn’t exactly “weak”, JJJ for example is 9% ABV,  but BigFoot was that next step up, which on a Sunday afternoon and surrounded by all the beer you could ever need, in great company is, well,  a little bit on the crazy side. If Stu had gotten his way, none of us would have got a look in,  thankfully he was in a sharing mood and distributed the beer around the table. This was the first time I had had BigFoot on keg and it was mind blowing, bitter sweet, perfectly balanced malt and big hops, yum yum yum. 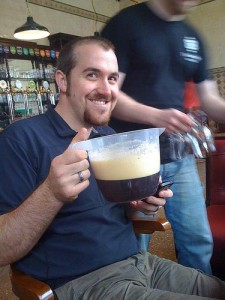 Then from somewhere a couple of bottles appeared on the table, these included a Thornbridge Murmansk, Westvleteren 8, Hardknott Granite and a couple of unlabeled bottles of Matthews home brewed beers, which were meant for Yan to take home but as ever he played the generous host and cracked them open. The Westvleteren was a bit of a gusher, not being one to waste beer, a certain member of the group decided to slurp it off the table, to be honest he had the right idea as its a bloody good beer and doesn’t come cheap.

However this wasn’t the silliest thing that particular member of the group did that afternoon, as he got up to go and catch his train he decided to perform a party trick of his, which is apparently staring to happen more often and proceeded to smash a bottle of Stuart Howe’s Chilli IPA all over the floor of the tap, this not being bad enough he then sucked some of the splash back from his trainer, which resulted in some rather odd looks from others in the pub. 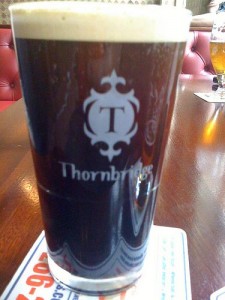 One by one the group dwindled and it was soon time for me to hop back on the train  and head home, I just wish I had left time for some food as an afternoon on strong beer after a full day of drinking during Twissup started to take effect, to put it bluntly I was bolloxed.

I had wicked day despite constant ribbing from Matt about my accent, it’s just as well his homebrews were pretty damn good and he also has a wicked sense of humour which lead to a couple of texts to our lass saying I wouldn’t be home any time soon as I had been arrested.

All the beers I drank were in tip top condition, really well kept and the range of beer available is simply stunning and is due to get bigger very soon. They all easily surpassed the bottled versions of the beers I had. I just wish I could get beer this good locally.

Big thanks to Yan for being so hospitable, Kelly and Scoop for sharing their knowledge and passion and to Matt and Stu for making me laugh more than I have in ages, hope to do it again very soon.

Please forgive the name dropping above,  it’s not often I get to drink in such illustrious company (outside of Twissup that is) They were/are a great bunch of guys who know their stuff.

You can view my pics from the day here

6 comments on “Twissed up Sunday”