Posted on March 8, 2011 by andyMogg in Twissup 3 Comments

It already seems like ages ago since I hopped on the short train journey to York for the first Twissup of 2011.

I arrived way too early so went for a quick wander around the lovely historic streets and had a look a the market in the square, only just resisting the urge to buy some curry and various lumps of cured meat and stinky cheese. 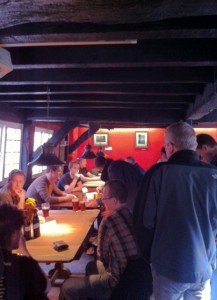 Fortunately I wasn’t the only one who was early and I soon bumped in to Ann, Dave and Sooty from Hardknott Brewery,  who despite having loads of work to do had made the long trip from Cumbria to share a few beers with everyone, after a quick catch up we headed to our first pub of the day, the Maltings.

There was  a decent choice of cask ales but I couldn’t decide so plumped for half a Roosters Leghorn and half a Stumpy’s Old Ginger, the Roosters was the pick of the two, light, hoppy, grassy and slightly fruity, the old ginger was just a bit bitter and not very gingery.

We were quickly joined by lots of other twissup’ers (is that right?) and all to soon it was time to head for our arranged tour at the York Brewery. When we arrived there was already a group waiting and a few more turned up before we were welcomed into the brewery and up into the bar for a few post tour beers. I went straight for the single hopped Motueka, part of York’s seasonal single hop series it was a lovely golden colour and full of citrus flavours with the malt becoming more prominent as it warmed up, next up was the other seasonal beer, First Light, this was lighter than the Motueka and slightly sharper, both beers were great session beers, just what I needed at that time of the day, managing to squeeze another couple in before the tour. I’m not sure what happened to Andrew the brewer but the bits of the tour I saw were interesting, having already done the tour a few months previously I ducked out and back in the bar for a few more beers.

Once the tour had concluded and people had finished their beers we headed down to Brigantes where I had one of the strangest beers I have ever had, It was from the Brass Monkey Brewery and I think it was simply called Baboon. It was really pale but had  a strange smokey, almost ashy taste to it, it wasn’t unpleasant just really weird and lots going on, my notes even mentioned balsamic vinegar so I was either starting to get a bit tipsy or it was really that strange. 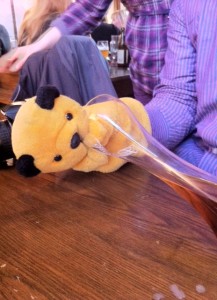 By now time was ticking on and we had an appointment at the small but perfectly formed Pivni, where they had kindly reserved the upstairs room for us. On arrival we were greeted with a huge choice of casked and kegged beer. I found it hard to see past the 5AM Saint from Brewdog, sinking both the cask and kegged version, I did get asked which was better and I honestly can’t remember. What I can remember is that the delicious Camden pale ale smelled of refreshers, I liked the second bottle of the new version of Hardknott Dave’s beers best, in fact I must have been seriously impressed as It was in capitals, shame I didn’t remember to store it’s name, Dave’s bitter also seemed to hit the spot along with Bernard Ox. I also remember thinking that the version of Riptide I tried in Pivni was lacking something compared to the bottled versions.

By now everyone was getting hungry so we agreed to meet in the Old white swan in an hour or so allowing people to visit their chosen fuelling stops without overwhelming any one place.

We headed for the house of trembling madness for meat platters and more beer, madness platter, perfectly chilled Jever and rauchbier the order of the day for me.

After this things got a bit blurry…..The white swan had the most unremarkable Jaipur I’ve had and someone was drinking the most eggy glass of John Smiths Cask I’ve seen in ages and there was another beer that simply went in my phone as a random string of characters.

The fresh air of the walk between the Swan and the Rook and Gaskgill did me the world of good, although for the life of me I can’t remember the name of the Ossett beer I was drinking, It  do remember it being rather delicious though.

It was now nearing home time and I needed some food so after traipsing round York, deciding against the dodgy looking Kebab that a certain brewer from Thornbridge had and finally re locating the hog roast shop a huge hog roast bun with all the trimmings was wolfed down and one final beer in the Maltings was had, whilst trying to avoid a bolloking for a certain persons swearing.

A HUGE Thanks to everyone who came, drank, discussed and had fun! I had a great day and I hope you did too.

3 comments on “Twissup did York”