Twissup Does Burton Upon Trent – Done!

Posted on May 18, 2010 by andyMogg in Beer Festivals & Events, Breweries & Pubs, The Sheffield Tap, Twissup 8 Comments

Well that’s it, Twissup Part Deux is well and truley over, it was one hell of a weekend, you will no doubt read lots of different posts and look at millions of pictures of the day’s events so I was going to keep it short, but failed miserably. Some of the stuff might be in the wrong order, after all it’s quite hard to remember which way you went when everywhere looks the same…

Firstly thanks to everyone who turned up, it was really great to meet you all and I hope you had a fantastic time. Thanks to Kristy for taking a break from revolutionising how we drink beer at home and putting in lots of hard work and greasing many palms not to mention putting up with all the grief I give her, although she did get her own back on more than one occasion and big thumbs up to  Molson Coors for their hospitality. 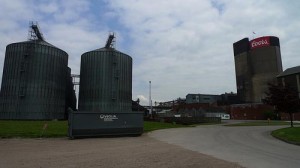 Things kicked off with an early train to Burton Upon Trent, on the way I bumped into Liz and Pete from the Harlequin and Brew Co (thanks for the chutney Liz, ill get stuck in soon), we were soon joined by Owen who over heard us talking about beers at Derby station and asked if we were part of Twissup, I did consider asking him what Twissup was and playing dumb but that would have just been cruel.

Collectively we arrived at Burton and headed straight for the Coopers Tavern, a quaint little pub with a selection of casks behind the bar. I was surprised to see that there pub was already packed with Twissupers and they were all getting stuck into the local beers, including Bass, Pale Gale and a couple of others.

It wasn’t long before chief Kristy ushered us on our way as we had to be at the Maltings for a tour, this was a bit of an honour as they don’t usually let people go for a wander round.

I found it really interesting (despite wanting another beer) and the guys that showed us round certainly knew their stuff and were very passionate about the malting process.  The best bits for me were the view from the top of the Molson Coors Tower and getting to see the family of falcons they have nesting on site.

Tour finished, High vis jackets removed we headed back to the coopers for a swift half before heading off to visit the brewery we were looking forward to most of all – Worthington White Shield and meeting the main man, Steve Wellington. 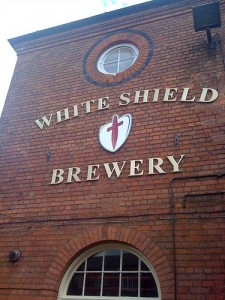 The home of White Shield

Steve is one of the most charismatic and genuine people I have ever met, he had everyone eating out of the palm of his hands and his passion and enthusiasm shone through, keeping everyone captivated throughout the duration of the tour.

The National Brewery Centre (where the brewery is housed) was packed full of stuff to see and do, we didn’t have time to see it all as there was a buffet and some beer waiting for us, this was very kindly provided my Molson Coors and was really good, especially the beef dripping chips and Red Shield Rarebit, although the P2 pickled onions were missing.

During the food Mark Dredge discovered his latest Fab Pow when pairing strawberries and clotted cream with P2 stout…it was an absolute winner, as was the  brewery tap beer, refreshing and very very drinkable. The p2 wass absolutely stunning and very reasonably priced at £3 for 2 halves of the 8% imperial stout, which in my opinion is one of the best Imperial Stout’s around.

After a few hours and a few more pints of various Worthington beers, including Red Shield, White Shield, E, the aforementioned P2 and brewery tap beer, along with a couple of others we headed off to the town and to a couple of other local drinking establishments. Including the Burton Bridge Brewery, where some people had a quick tour others, chose to sample their ales

The whetmore whistle was slightly disappointing, they didn’t have a great range of beers on and the Miss Russia that I plumped for not only had a pumpclip that is soon to appear on pumpclip parade but wasn’t particularly great, in fact I soon swapped it for a pint of Grolsch, after all it would have been rude not to try at least one glass of lout from Molson Coors portfolio, It was golden, cold and refreshing but it’s not going to become a regular tipple of mine. The hilight of the pub was Mr Dredge declaring his love for Desperados once again and trying to persuade the other twissupers that it was the greatest beer in the world….I don’t think he succeeded. 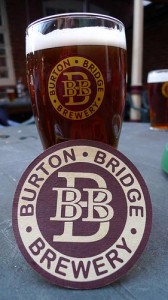 We then headed off to trendy drinking establishment the Dial for a pint of Blue Moon…including a slice of orange, personally I preferred the bottled version, the pint warmed up too quickly and was a little bit sweet for me to drink a full pint of, others seemed to enjoy it though, I soon switched to Red Shield which is an all together more drinkable beer.

By now people were starting to head for home, slowly but surely the group of nearly 30 people dwindled to a handful, and after a brief heart stopping moment where I thought I had lost my camera we headed back to the Brewery tap for more P2 and White Shield. In the interests of fairness we tried the White Shield, Red Shield and E with and without sparklers, the beer was in such fantastic condition that even without the sparkler it looked and tasted brilliant.

As the hours past we started to get the munchies, luckily we had spied at rather tasty looking curry house round the corner, unfortunately it was closed, step up Mark Fletcher, who persuaded the owner to open up if we all ordered a curry. This more that makes up for his cock up with the keys when Twissup did Sheffield earlier in the year.

The curry was great, my hot lamb madras, did what it said on the tin, as did my keema naan, it was just enough to fill us all up and soak up some of the alcohol, all that was apart from Mitch who decided he would rather fall asleep in this chair, I don’t think he will be doing that again after someone kindly painted him with a rather nice shade of lippy, once we managed to wake him up those of us that were staying at the rather fancy grade one listed, Molson Coors owned town house to see what was in the fridge.

Most of us went straight for the Worthington range, one blogger (who had earlier in the night declared desperado’s as the best beer in the world) decided he wanted to drink Carling C2 from a rather splendid snifter glass…each to their own I guess.

After an hour or so of beer and chat we all retired to our rather huge and splendid rooms for some much needed sleep, and with that day one of Twissup concluded.

Day 2 started with a rather large breakfast before we all headed for our trains….for me the next chapter had only just begun as I was heading for Sheffield Tap and a date with a face full of hops….more about that tomorrow!

You can see more of my pics here

, there aren’t many because there was a greasy finger mark on my lense and becasuse after thinking I had lost my camera I decided it was best to leave it in the hotel.

8 comments on “Twissup Does Burton Upon Trent – Done!”