Inspired by Reluctant Scooper’s Twenty Breweries series I thought I’d take a look at some breweries that I think don’t get the praise and recognition they deserve, breweries that If I see one of their pumpclips or bottles I know that there’s good beer to be drank.

Yorkshire Dales Brewing Co was formed in 2005 in the rural village of Askrigg, North Yorkshire. It’s got a 5 barrel brew capacity, brewing a range of both cask and bottle conditioned ales, covering a wide range of styles and ABV’s 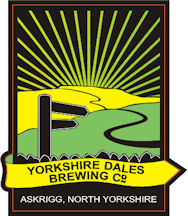 Beer from the heart of Yorkshire

They brew a core range of around 6 beers cask beers and 7 bottled beers ranging from the 3.7% Butter Tubs – a pale golden session beer hopped with Cascade up to Garsdale Smokebox, a 5.6% smoked porter.

This is then complimented by a whole host of seasonal and special brews, such as their single hop series and house beers for great pubs like Bacchus in Newcastle and The Farmers Arms in Muker along with a bottled beer for Lewis & Coopers Store in Northallerton.

They have recently launched a new twin hop series taking their favourite hops and pairing them up to produce a range of 8 new beers, all 4.1% or under.

For me this is what makes them one of my favourite breweries, the core range of light, pale, hoppy beers are perfect for just about any occasion, I’ve been known to call in at the Kings Head in Gunnerside for a pre walk sandwich and pint of Askrigg ale, then the Farmers Arms at Gunnerside, mid walk for a pint of Muker Silver followed by the Kings Head at the end of the walk for more Askrigg.

The pale hoppy beers all have plenty of character although sometimes lack a tiny bit of body, I’ll usually forgive this though as I still think it’s hard to find a sub 4% pale ale that’s not a little bit thin.

The darker beers also excel, Garsdale Smokebox is dark, peaty and rich with bags of smoke and the limited release barley wine was delicious.

I’ll be honest I really like their branding, the brightly coloured hills and sign post stand out on both the bar and the shelf and the new slightly tweaked clips that have the hops on the sign is a great idea.  The website however lets them down a little bit and the contact page seems a little bit standoffish to me.

Yorkshire Dales Brewing Co beers can be found in cask through the North of England. Bottles can be bought online at Beers & Spirits or from various outlets listed here.

One comment on “Underrated Breweries No 1: Yorkshire Dales Brewing Co”