Underrated Breweries: No 4: The Brew Company

Posted on December 20, 2011 by andyMogg in Beer Stuff, The Brew Company 3 Comments

I first met Pete from the Brew Company at Twissup in Sheffield, where he not only introduced me to his better half Liz who runs the Harlequinn pub in Sheffield but also to one of my now favourite tipples, Angostura 1919 rum.

The Brew Company started brewing in 2007 after Pete left Cadbury’s and have since gone from strength to strength,  Pete’s not affraid to try new things and knows how to get the most out of a huge array of hops and malt, he brews everything from pale hoppy session beers to dark rich stouts and has recently brewed one called Silly Billy Chilli which sounds fantastic. 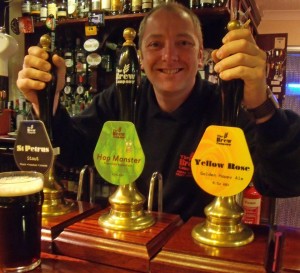 The last few seasonal and celebration ales I’ve had from Pete have been fantastic especially the celebration hoppy one (which the name of escapes me) that was on in the White Swan in Stokesley a few months back.

You can always find his beers in the Harlequin and in plenty of pubs in and around Sheffield as well as further a field, they are more than worth tracking down and trying.

I know Pete and Liz work really hard so probably won’t see this but I hope they have a great Christmas and the brewery and pub continue to grow in 2012 and beyond.

3 comments on “Underrated Breweries: No 4: The Brew Company”