All being well this should have auto posted just as I sit down to eat our wedding breakfast of Chilli Beef Pie, Mash and Peas…hopefully with a couple of pints of cask ale and a couple of bottles of Durham Temptation.

Even though we’ve been engaged for a long while we’d never really thought that hard about getting married, although when we had discussed it we both knew we wanted it to be a little different and I knew I wanted to have some decent beer there as all too often wedding venues only ever have keg stuff from Tetley’s/John Smiths or Boddingtons and that’s no fun for anyone. Although there was a minor cockup and a last minute rush to find a replacement for Windemere Pale Ale….shame as I think it’s pretty much the perfect wedding beer.

So when back in November we went for a spur of the moment look round Danby Castle, somewhere we’d walked past loads over the years, never realising it was a wedding venue, after being shown round by Carolyn and Duncan, asking a few important questions, like what beer can you get? we knew this was the place we wanted to tie the knott and as it happend they had a Saturday free in 2012. Although we both like to plan stuff we’ve never been one of those couple that plans everything so far in advance so 6 months seemed like more than enough time.

It also happened that we booked it shortly before Twissup did the Toon, so Twissup had a little bit of extra celebration about it. It also meant I got to catch up wtih to Tom and Oliver who’d recently taken over Roosters Brewery in Knaresborough and whom I’d not seen since The battle of the breweries in York while we were putting the world to rights one of them (I’m not sure which one, they are twins and I had consumed a fair bit of beer) mentioned they had a small test plant at the brewery which was great for doing special runs of beer). A few phonecalls and emails  later I found my self on the train to Knaresborough ready to brew a beer for the wedding.

3 trains and 2 cups of coffee later I arrived at Knaresborough where Ol kindly picked me up and whisked me off to the brewery, having been a fan of Roosters since I can remember I was looking forward to having a look round and seeing how things worked…I know everyone says once you’ve seen one brewery they are all the same, in some ways thats true but every brewery has it’s own little twists and bits of kit that others don’t have and every brewer has his own ways of doing things. 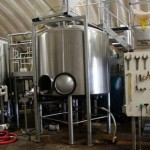 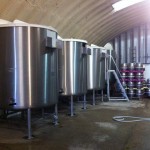 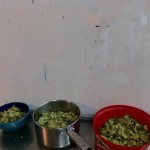 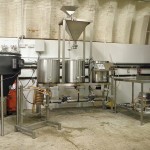 The tour over with and a cup of tea supped, we got down to the  serious business of making some beer. Luckily for me Ol had done most of the work on cleaning the kit and weighing out ingredients so we only had a few bits to clean and then I was let loose in their huge hop store…it was a hop head’s heaven, the smell was intense, I could have quite happily sat in there all day…although I’d have probably ended up with frostbite.

I wasn’t entirely sure what to choose hop wise as I wasn’t expecting such a wide variety to choose from, In the end I picked two of my favourites…Cascade and Amarillo and then one I’d not seen before, Crystal. We weighed them out into some technical vessels otherwise known as a cereal bowl, saucepan and celebrations tub before cracking on and getting mashed in.

Time and conversation flew by, Ol was great, he explained everything to me and showed me how the kit worked, the kit it’s self was fab..I’d really love a setup like that in my garage. All too soon it was time to add the hops, they immediately added some fragrance and fruitiness to the aromas wafting up, I was in heaven.

Soon after the delicious smelling wort was transferred into a rather space aged looking fermenter and it was time to clean the kit and then sample some beers, Ol gave me a try of a couple of their new beers including their stout which was gorgeous this was then followed by a Southern Tier Oak Aged Unearthly Pale Ale which I’d taken down to share, it was probably past its best and no where near as tasty as the super fresh beers I’d tried before hand. 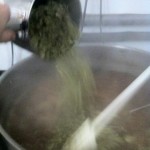 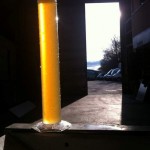 Four rings in the Sun 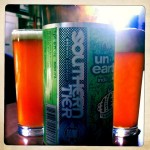 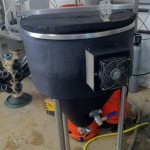 Brewery cleaned and beer supped it was time for a quick trip to Blind Jacks in Knaresborough for a couple more beers and a bowl of Bombay mix before heading for the train…although the less said about the train the better as I was over an hour late due to delays and cancellations.

Fast forward a couple of weeks and my stag do in Newcastle has been and gone (thanks to the guys at Bacchus and Free Trade for making a great one) and I find my self driving down the A19 though every weather condition imaginable to go and bottle the beer. I was nervous and excited to see how it had turned out. Ol and Tom had kept me up to speed with its progress over the weeks they’d let me know how it had fermented, when it went into cask and let me know when they’d dry hopped it with some more Cascade.

Arriving at the brewery it was nice to catch up with the guys face to face and after the traditional cuppa we got down to the task of cleaning and sterilising everything. For anyone that whines about the price of bottled beer from breweries who don’t bottle a lot, I suggest you go and spend some time bottling at one. Cleaning and sterilising the kit and bottles takes a huge amount of time and effort, not to mention water.

The fun doesn’t stop there, once the beer had been transferred from the cask to the bottling keg and then bottling machine set up and tested…although this did allow for a quick sample of the beer, it was smelling and tasting fantastic, the aromas were so fresh. Each bottle has to be put on the machine by hand and while it automatically caps the machine the turn table has to be moved round manually each time too…after all 53 bottles were filled, capped and numbered  It was time for more cleaning before packing the beer up for it’s journey back home for labelling. 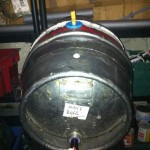 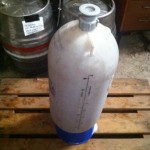 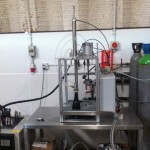 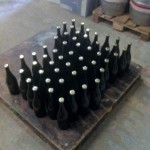 The following day was spent cleaning the bottles and sticking all the labels on, the labels had kindly be designed by Tom after I came up with a name and some blurb which was the most difficult part until I tried to stick the labels on, getting them straight and bubble free was a task and a half, I really do feel sorry for who ever has to do this as part of their job at Roosters.

The name Four Rings came from the old joke about every marriage having four rings, the engagement ring, wedding rings, enduring and suffering. Hopefully there won’t be too much of the final two in our marriage.

While I sit typing this I’m just doing a bit of quality control on one of the bottles, it’s very nearly there, just needs a bit longer in the bottle, the lovely fresh fruity almost strawberry aromas are still there and there’s plenty of citrus and spice in the mouth with a nice underlying bitterness, with a little bit more conditioning in the bottle I honestly think it’s a cracking beer so I hope everyone who gets to try it enjoys it. 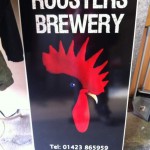 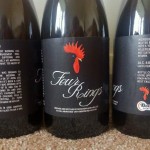 Four rings, back, side and front. 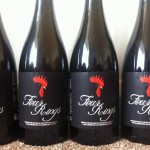 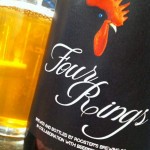