Saturday night saw a trip up to the much anticipated White Swan and Captain Cook Beer festival (not to be confused with the Captain Cook pub beer festival which was on at the same time in Staithes).

We arrived at the White Swan in Stokesley in the early evening after a rather eventful taxi ride, It had been bright sunshine and baking hot all day but as we were about half way to Stokesley the heavens opened, flooding the roads and reducing visibility to almost zero, this was followed by a crazy hailstone storm which luckily finished by the time we got to the pub. 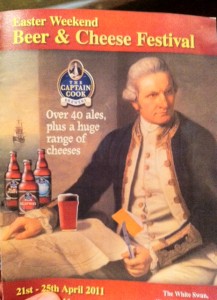 The plan was to have a couple of beers before heading for some Thai food over the road then back to the beer festival for a few more beers and a plate of cheese.

The pub was already quite busy and had sold out of some of the beers I wanted to try, but that’s a chance you take when you go on the second day of such an event. I decided to start off with Equinox from Great Heck Brewery, It was pale, light and hoppy, slightly zingy and a lovely malty backbone. I also had a quick slurp or Hefe Weizen which is Denzil’s take on a German Wheat beer, this was also delicious, again quite light, plenty of fruit and that lovely slight yeasty quality, nicely carbonated, I could have quite happily supped a lot of both of these beers.

Next up was Resolution from host brewery Captain Cook, another light and hoppy ale, slightly bitter and a little bit of caramely malt, easy to drink and won’t get you hammered, great stuff.

The final beer before heading for food was my least favourite of the night, It was Shakespeare’s county from Warwickshire Brewery, It sounded great on paper…Pearl pale malt, crystal malt, black malt, roast barley and wheat malt hopped with Goldings. Unfortunately I just couldn’t get on with it. It smelled and tasted really ashy and a bit like some dog treats we bought (well it tasted exactly like they smell as I’ve not actually tried eating them). there was another flavour but I forgot to note it down… I’m sure I told Matt or Dave during the night so if either of you can remember what I said please shout up.

After surviving on red wine at the Thai restaurant and having a lovely meal (although not quite as good as my favourite Thai place, The Blackwell Ox in Carlton, which also does cask beer to boot) we headed back to a now even busier pub, we squeezed onto a table in the corner and ordered a couple more beers. 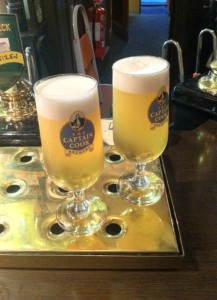 I went for another pale beer, Hop Star from White Rose Brewery, it said it used Summit and Columbus hops and that was all I really needed to know, It had  a huge head but was velvety smooth in the mouth, lovely grapefruit and pithy citrus flavours balanced with a really moreish bitterness, another one I could have supped all night.

While drinking the Hop Star I’d picked 5 cheeses from the huge list that was on offer so as soon as I finished the last mouthful I headed for the bar, It was at this point I bumped into Matt, the brewer, (read about him here) and as if by magic a pint of Trio from Saltaire appeared in my hand. While drinking (and forgetting about ordering some cheese) this delightful biscuity, piney and grapefruity ale, I was chatting to Matt who offered to show me round his brewkit, so we nipped out the back for a welcome bit of cool air. From what Matt was saying they have some big plans and I’m quite excited about them, especially their next seasonal ale.

After cooling down in the brewery we headed back inside and started on the dark beer, Schooner Grenville Stout from Captain Cook, a deep, dark stout, with lovely roast coffee and toasted flavours that was velvety smooth and punched well above its 4.7% ABV.

That turned out to be my last beer of the night as It was time to head back to our taxi and head home.

I had a great night, the White Swan is a fantastic pub, the festival was pretty well organised, especially the big TV screen with the live beer list on.  It’s made even more impressive in the fact that most if not all the beers were beers received as swap deals with other brewers…Top stuff.