Williams Brothers recently saw me mention this post about Frank’s Ginger Ale and dropped me a line, offering to send me some of their new Ginger Beer, which was part of a test batch they had brewed and were looking for feedback on. 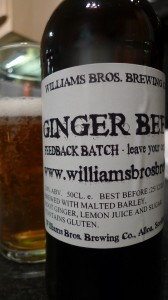 I didn’t really make any notes about the beer other than it had a brilliant ginger kick at the end, so I am drinking the second bottle they sent me as I write this, It’s had time to settle and It’s not as chilled as the first one.

It poured a lovely golden colour with a pretty decent bubbly white head, much more so than the first bottle I had opened, I rekcon the ammount of fizz is just about right,but if it is designed to be chilled then it could maybe do with a touch more.

The aromas were mainly of ginger and spice but there was a little hint of citrus in there, possibly grapefruit.

The taste was fantastic, not too sweet, really well balanced, predominantly ginger with a hint of citrus coming through, the finish reminded me a lot of that Old Jamaica Ginger Ale you get in cans, just much less sweet, which leaves it tingling your tongue and your throat as it slides down with some ease. There is barely a hint of any alcohol in this, which is no bad thing.

I really hope this makes it into production and into the supermarkets, I could see this being a big hit as it’s best alcoholic ginger ale I’ve tried, closely followed by Roosters Ginger Ale I had in York. I could also see this working with a hint of chilli being added to give it that little extra dimension.

They also sent me a few other bottles from their range, which I am working my way through so keep your eyes peeled for the reviews on those coming very soon. In the meantime follow them on twitter here or visit their shiny new website here.