Williams Brothers are one of the few breweries that do Twitter well, they interact, they answer questions and the listen to feedback, A while back I got chatting to them and they sent me some of the test batch of their Ginger Beer, when It arrived I was most surprised (and pleased) that they had sent me a few of their other ales to try as well. I’ve had a few of their ales before on cask and in bottles and haven’t as of yet had a bad one. 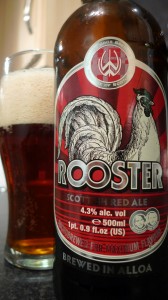 After supping both my bottles of rather delicious Ginger Beer, I turned to the box that was sitting by the back door waiting to be inducted into the beer cupboard after the rather geeky task of creating a spreadsheet of BBF dates. The first bottle I pulled out was Williams Rooster, a 4.3% ABV Scottish Red Ale.

It poured just that – deep dark red with a huge bubbly head, the aromas were of malty sweetness, a little bit of hop and a bit of nut.

Taste wise it was unique, I don’t recall trying a beer that tasted like this before, it’s got quite a lot going on but it all mellows into a lovely finish.

The body is lovely, full, deep and quite creamy, there’s a big hit of malt and sweetness followed by some citrus from the hops, there’s also some herbs and spice in there, something flowery like coriander or parsley, there is also a bit of a woody almost oak taste to the beer which is nice and mellow. The finish is bitter, dry and malty, great stuff.

All in all i loved it, it’s not a beer I could drink pints of but it is most certainly one I could drink regularly. right now Williams Brothers and Scotland in general are making some amazing beers and I need to try more of them.

I will review the rest of the beers very soon, I am just catching up on a backlog of reviews as and when I can as I’ve got lots going on at the moment.