Posted on June 14, 2011 by andyMogg in Beer Reviews, Woodfordes 3 Comments

A while back I was very kindly sent a selection of Woodforde’s Norfolk Ales. These included Wherry, Sundew, Nog, Nelsons Revenge, Head Cracker and Admirals Reserve

I’d not had any Woodforde’s for a long time, my first was Wherry at a beer festival many moons ago. 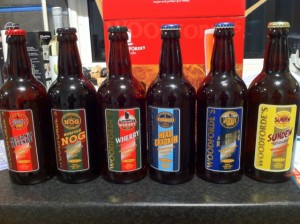 Solid range with a couple of crackers!

I always remember my first batch of homebrew being Woodforde’s Wherry, it was one of those kits where you mix so many pints of hot water with a few pints of cold water, then chucked in the two tins of extract, gave it a good shake then left it for a few days. I’d followed the instructions to the letter and it came out pretty well. After that I worked my way through the range of kits so I was looking forward to trying to trying the proper versions that I’d been sent.

I decided to try them all in one session so I could compare work my way from weakest to strongest and make it a bit easier to decide on my favourite.

First up was the aforementioned Wherry, in bottled form it comes in at 3.8% and has won loads of awards over the years.  It’s a great example of a good solid bitter, it’s got some lovely herbal grassy notes on the nose and in the mouth, It’s really well balanced there’s very little bitterness but enough of a bite from the hops to keep the malt at bay which makes it pretty much perfect example of a style that made English Ale popular throughout the world.

Next up was Sundew and a new one on me, Sundew comes in at just over 4% ABV. It smelled a bit like digestives covered in marmalade and tasted pretty much the same but with a little bit of golden syrup sweetness thrown in which if I’m honest was bordering on a little too sweet for me, I couldn’t help think that if I’d chilled it a little bit more than It might have killed the sweetness a bit and made it more refreshing.

Beer number 3 was Nelsons Revenge, another beer I had made from their home brew kits, the same biscuity malt backbone that was present in the first 2 beers was in Nelsons Revenge too, there was a huge handful of fruitcake like dried fruit and a little bit of marzipan…almost like Christmas cake, the hops and bitterness were more pronounced in this than the other two and it had a delicious nutty finish.

Next up was Norfolk Nog, I was looking forward to this as nearly bought it as a home brew kit once but went for the Great Eastern one instead.

Nog is classed as an old ale and it’s packed full of sweet and fruity dried dates which when combined with the herbal and slightly smoky flavours make for an interesting drink. It’s not as sweet as I thought it might be in fact it was quite dry which made it quite quaff-able.

Beer number 4 was Admirals Reserve, again another one that I had tried in home brew form and hadn’t really got on with so was hoping it was better than my efforts.

The final beer was the strongest of the bunch at 7% ABV, considering this it hid the alcohol better than the Admirals Reserve, There was a fair bit of yeast on the nose, along with a little bit of orange. In the mouth it’s a little bit oily there was a bit of toffee and a hint of pine needle, the orange comes through a little as does a little bit of the yeast. It’s nicely balanced and quite complex without being over the top.

I think I remember putting on facebook that Woodforde’s Ales were good  solid beers but nothing spectacular, this may have been a little harsh It wasn’t meant to be a derogatory term, They all had their plus points but Head Cracker and Wherry were both great beers, really interesting and full of flavour….the two I’d choose over the others for sure.