It’s been a very long time since I’ve visited the Woolpack Inn, deep in the Lake District, In fact I’m not even sure Dave and Ann were there when I last went. But after previously meeting  them both a few times we decided that we had to visit the pub. 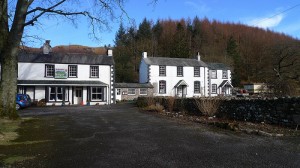 headed for the Woolpack, unfortunately as seems to be the case when ever we go to the Lakes, it was still hammering down when we got there. We donned our waterproofs and hit the hills, a couple of hours and many mm or rainfall later we arrived back at the car and set off for the Hardnott pass – one of the craziest roads in the country, as it turns out it was closed due to the snowfall last week so we had to double back and go the long way round passing through many a Lakeland village and many great pubs.

We eventually arrived at the Woolpack just before 19:00 where we were warmly greeted by Dave and Ann who showed us to our room before we headed off down for pre tea drinks. Just as we got to the Bar, renowned beer geek Jeff Pickthall came in, to my surprised joined Emily in having a cup of tea, I on the other hand opted for a pint of Hardnott Light Cascade, one of Dave’s own brews and a great way to start the evening. It was light, refreshing and had plenty of cascade hops. Next on the menu was a pint of Grassmoor dark ale, quite tasty but very malty!!

The food was excellent Em had the fillet steak with ginger and Cointreau and I had the Eskdale Pork Othello which was simply delicious. When dessert arrived I asked for a beer to go with my the unbelievably tasty Blue Bore Bomb (White chocolate, cream cheese and Blengdale blue cheese fondant encased in dark chocolate with a crunch base) I asked for a beer to go with it, Dave pulled out a bottle of Tactical Nuclear Penguin and asked if that would do, I wasn’t going to say no at the chance of trying a drink I had heard so much about.

TNP wen’t really well with the Blue Bore Bomb, the dark smokey, peaty and licorice boozy liquor really complementing the sweetness in the pud. There was a lot of discussion about the drink from everyone in the pub, in general everyone agreed that it was a rather tasty drink but in no shape or form and no matter how it started out that in it’s drinkable form it was not a beer..it was in fact a spirit, it was even discussed that it might work well with a dash of coke, ice and a slice….not sure I’d go that far but Emily would love to try it.

After the table was cleared and the mini Woolpack’s were picked up from down the road Dave and Ann joined us in the bar along with a few locals and Alan the barman. At this point the night turned into a bit of a tasting session with a rather dangers array of ales being brought out and shared.It started with Dave’s Ã†therBlÃ¦c, a whiskey barrel aged stout that may have even converted Jeff as he proudly announced he wasn’t a fan of anything aged in oak casks, only to change his mind once he had tasted Dave’s beer, Next up was Granite, Dave’s barley wine, was also pretty tasty  but Dave was the first to admit it was a bit young and needs more time in the bottle. Both these were soon supped, then out came Zippy Red IPA, this wasn’t quite the finished product and needing some conditioning but we all agreed, given a little time and the odd tweak it could be come a sublime, hoppy IPA with a lovely red colour. While we were drinking these Emily was sampling the range of fruit beers that Dave and Ann sell, a great range it was too and she was kept more than happy by the choice. 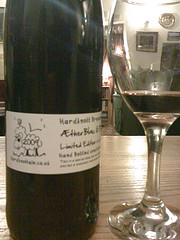 A couple of geuze’s were then brought out along with a rather large cheese board packed with great local cheese, both the beer and the cheese were fantastic, the geuze was a sour palette cleanser and the mort subite was bordering on a bit too sweet but was very tasty non the less, even Emily decided she quite liked them, she also surprised us by picking out loads of flavours from some of the other beers like the rauchbier and Dave’s Tenacity Stout.  I think we may have started the conversion to beer geek. We also cracked open a Lost Abbey Serpent Stout that Phil from Beermerchants sent me, it went down very well for something that weighed in at over 11%, at first I thought it was a little too sweet but then as it warmed and I drank more of it, the sweetness died away and it was very tasty indeed. 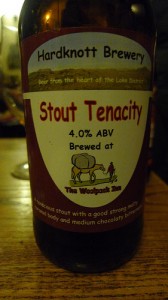 One by one people drifted off, leaving just myself, Jeff and Dave, putting the world to rights and discussing various beer related things, some of which if I told you I would have to kill you.

Eventually we decided to call it a night as we cleared the last bits from each bottle, leaving Dave to clear up the mountains of over sized tasting glasses that we had been using.

The next morning the weather was glorious, everyones heads were a little bit fuzzy and the lovely local breakfast was welcomed with open arms, washed down with lashings of tea and coffee. We then left Dave and Jeff to get on with some important work and we headed out into the hills for a walk.

All in all we had a fantastic time, great food, lovely beer and warm and welcoming hospitality, Dave certainly knows his beer and where he wants to take it. Keep an eye on him over the coming months as I am sure he will, sooner or later hit the big time.

In the meantime the only place you can get his beer is from The Woolpack, check out the website here or follow Dave and Ann on twitter. You can also read Dave’s blog here.

I would also like to point you in the direction of Jeff’s twitter and blog if you haven’t already seen them, the blog especially is worth following, he really knows his stuff and isn’t scared to tell people what he thinks, that is a quality that I wish more people had. 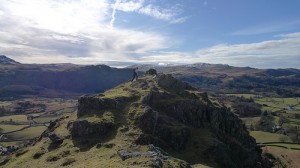