Anybody that knows me knows I don’t do football. I don’t watch it, I don’t show it in my pub, I don’t support a team, and I am unable to enter into ANY conversation regarding the sport due to my lack of knowledge. When I was growing up I never understood how my friends seemed to retain an encyclopedic knowledge of teams, players, matches, goals & final scores. However as I got older I could suddenly recall my own encyclopedic knowledge of beer, breweries & locations, ABV’s & styles, tastes & flavours and realised that it is easy to remember the tiniest detail about anything at all, as long as you are passionate about it!

So there are two reasons why I took part in the World Cup Beer Sweepstake, firstly due to my love of all things beer, and secondly to have something to talk about during the World Cup and an incentive to follow the tournament. I was very excited to be taking part in such a great idea, a World Cup Sweepstake, with a beer hunt & beery’ prize kindly supplied by Ales by Mail. For those who want to know more about The World Cup Beer Sweepstake see either the Beer reviews or Pencil and Spoon blogs for the organisers Andy & Mark’s take on the whole idea or search for #wcbeersweep on Twitter.

Waiting to see who I was drawn against was exciting, I didn’t want an easy life (i.e. England or USA), but I did want to be able to actually find some beer (I definitely didn’t want North Korea!) I was too impatient to watch Mark drawing the names out of the hat/bowl so I dived straight into the list to discover I had drawn Denmark. Six months ago I would have been disappointed that I had no other option than to find some Carlsberg Export, however I recently read Pete Browns Book,Three Sheets to the Wind’ and I now knew there was much more to Danish beer.

I â€˜googled’ Danish breweries and remembered that Pete Browns had an eye opening visit to the Carlsberg Jacobsen brewery, the search began. A few tweets later and @BrisBeerFactory, @BeerReviewsAndy & @RecentlyDrunk confirmed that I should in fact be searching for Mikkeller beers, â€˜Beer Geek Brunch Weasel’ in particular. Imperial Stouts are a great favourite of mine, but my search was fairly fruitless. I couldn’t find any REALLY interesting Mikkeller beers at any of the online beer shops and I couldn’t think of anywhere else I could possibly get hold of them. Then an old friend came to the rescue, Andrew from The Bristol Beer Factory agreed to a mini beerswap and to let me have the bottle of Brunch Weasel from his own private stash as well as a few Bristol Beer Factory beers. Bowled over I instantly agreed to let him have some Crouch Vale Apollo, Stone IPA, Red Fox Ruby Red Mild & Hardnott Granite & Aether Black from my private beershelf.

Some people said this was too easy, so in order to appease @richardmackney my search continued until I found a bottle of Amager Bryghus Nitro at Beers of Europe. This interesting little number looked like it would satisfy the other spectrum of beer I crave, a real Hopmonster, a Double (Imperial) IPA at 10%. So much for joining in football conversations, I soon realised I wouldn’t remember much after trying these two beauties! 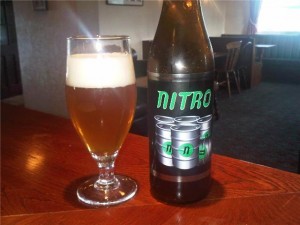 Nitro by name, but how about nature?

First up was the Nitro. It poured a hazy golden colour with a very tight foamy head, it had a real sweet & sour aroma, lots of hops and a hint of orange, combined the strong smell of alcohol it almost smelt like Southern Comfort! An alternative description from Bernie, my Assistant Manager, was “It smells like somebody stood a daffodil in some watered down whisky”, so you’ll have guessed by now this wasn’t exactly a ‘normal’ beer.

The first sip was extreme,  now I LOVE my hops, but this was something different, huge hoppy flavours, intense bitterness, as I continued to sip it actually made me shiver! You can really taste the alcohol in this beer, much more so than alot of 10% beers, the complex flavours developed as I progressed down the glass, still with a hint of orange, and as I got to the bottom of the glass, I still didn’t like it.

Next was the highly commended Mikkeler Beer Geek Brunch Weasel (although I hasten to add I didn’t drink both beers in one session!). According to Ratebeer one of the most expensive coffees in the world is used to brew this Imperial Stout, so called because the coffee beans are previously digested by weasel-like civetcats. It pours a rich dark chocolate colour, almost black, with a fantastic caramel head. Swirling the thick beer around the glass left some great legs on the glass. Strong roasted coffee & chocolate aromas smacked me in the face. 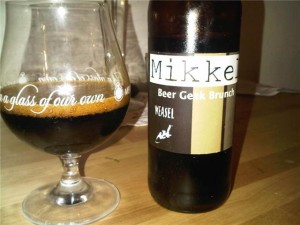 The first sip, almost syrupy texture with a gentle carbonation, gorgeous coffee flavour, rich dark malt and a real sticky sweet finish. It’s like drinking dessert, a velvety smooth espresso & chocolate mousse. This really is a stunning beer. I love Imperial Stouts, Brooklyn Black Chocolate, Brewdog Tokyo* but Beer Geek is a cut above, definitely one of the best beers I’ve ever drunk. Thank you Andrew!

So which beer should represent the Demark football team? Well they’re out of the cup so I guess it’ll probably have to be Carlsberg! Although what beer we could use to describe the English performance is beyond me… any thoughts?

Thanks to Mitch for taking part and for sending me this blog post, I really enjoyed reading it and hope that you do too.