When Mark paired me with Nigerian in the World Cup Beer Sweepstake I immediately knew I could get Guinness Foreign Extra Stout, or at least a version of it that is actually brewed in Nigeria, I also thought I would see what other drinking delights came out of Nigeria so I set about a journey around the wonderful world of the web.

Nigeira has a population of roughly 154 million people, living in an area of 356,669 sq miles, it’s capital city is Lagos and it’s president has the rather cool name of Goodluck Jonathan. 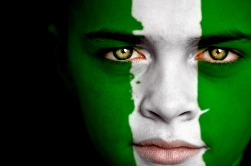 Anyway enough of the facts and more about the beer, my first port of call lead me to this handy page about the beer and breweries of Nigeria, it turns out that beer is a growing industry in Nigeria (just like the UK) and that of all the alcoholic drinks sold in Nigeria, Beer accounts for a whopping 96% of sales.

Too my surprise most of the breweries I found had a website, so in some kind of weird role reversal I set about emailing them asking if there was anywhere in the UK I could acquire their wares, it was at this point I got distracted by remembering the African Scamster, George Adgdgdwngo from the channel 4 series Fonejacker (not to mention the 1000’s of email’s I’ve had from Nigerian “banks” over the years), I spent the next 2 hours watching clips of Fonjacker on youtube and the C4 website…It didn’t help me find Nigerian beer but it did give me stomach ache from laughing so much.

Among the breweries I contacted were Benue Brewery who make no less that 5 beers, the most popular being “More” and according to the blurb more is produced from a mix of plain Sorghum and malted Sorghum in a specific ratio. Sorghum is the chosen grain because it provides that familiar African taste to the beer besides being abundantly grown across Nigeria. It is more satisfying to use the national resources in a manner that benefits the local populace.

â€œMOREâ€ is specially brewed in controlled manner under closely monitored processes to confine it to precise parameters which gives the beer that special aroma and taste that makes it difficult for even a regular beer drinker to discern if More is brewed out of a grain other than Barley.

This African Beer â€œ MOREâ€ is comparable with any International Beer of repute made of Barley. But is more satisfying because it caters to the African palate, has that pleasant aroma that goes down well and is made out of 100 % indigenous raw material. It is available in 60cl bottles.

Unfortunately like all of the breweries I contacted, I heard nothing back, to be honest I wasn’t surprised by this, although i was a little disappointed that Nigerian Breweries Ltd, didn’t get back to me, mainly because they are supposedly the biggest of the breweries in Nigeria and brew brands like Star, Gulder, Legend, Heiniken, Amstel and a couple of soft drinks. 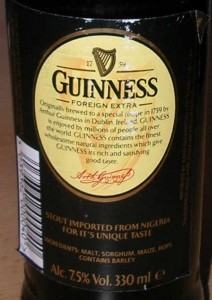 By this point I had learned enough about the different brands and names of beer so set about trying to see what was available in the UK. As it happened Beers of Europe sold Star and Gulder along with the Nigerian Guinness,  unfortunately I had just placed a rather large order somewhere else so thought I better not buy any more beer online as I would never just be able to order a can/bottle of each of the Nigerian beers without spednding money on some of the other wonderful ales that they stock.

Luckily for me Guinness Foreign Extra Stout is available in Asda and Tesco, although on closer inspection the FES in Asda hadn’t been anywhere near Nigeria, the one that tesco stocked on the other hand was the genuine stuff. I  managed to leave Tesco with nothing more than 1 bottle of FES and a packet of oak smoked bacon.

Basically Nigerian Guinness is un-fermented Irish Guinness wort that has been sent to Nigeria, it is then mixed with various local ingredients like sorghum which gives it is’s local character, along with making it easy to produce as Nigeria isn’t know for its quality malt,barley and hops.

It pours really thick and almost gloopy with a thin brown head, it smelled really funky, yeasty, bready with hints of coffee and burnt toast, and tasted much the same. It was surprisingly light for something that’s 7.5% and been shipped half way round the world and back again.  I wish I had got a bottle of the Irish FES to see how it compared as you could tell the Nigerian one was based on Guinness, but those extra African ingredients gave the taste another level. At first I quite enjoyed it, especially the sourness but as it warmed up it was just too strange and I struggled to finish the bottle.

During my searching I found quite a few recipes for stews and simple Nigerian dishes but I wasn’t brave enough to try any of them, instead I had it with some chocolate cake that had green icing on whilst watching “hi-lights” of Nigeria’s 2-2 draw with North Korea, and with that they were out of the World Cup and my chances of winning free beer had gone!