We managed to get 64 names down to take part in the World Cup Beer Sweepstake so we’ve got two separate competitions running, both with the chance to win free beer. The first 32 names who entered are playing for a year’s subscription to myBrewerytap’s 52 Week Beer Club. The second 32 are playing for a box of beer each from Ales by Mail, Adnams Brewery and Highland Brewing Company. 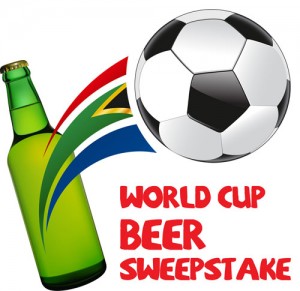 The same rules apply for both: everyone gets drawn a team and they have to find a beer from that country then drink it and write a blog about it. You can only win if you write a blog : no blog, no win, simple. And you can only win the beer if you can get it delivered somewhere in the UK, I’m afraid :  if you can’t then the prize is forfeited to the closest runner-up (but you are playing for fun, not free beer, right). There are a number of guys who are happy to take guest posts, you can contact them yourself, don’t be shy : Mark, me, Chunk, Baron Orm, Robbie, Peter Olding.

No rules about what the blog post is : it could be 50 words or 1,000 words, pitched any way you want : except that it needs to involve the searching and (hopefully) finding of a beer from the country you are drawn and then the drinking of it. Feel free to put in some other links to the beer – drink it while your team play, add some beer facts about that country or a food and beer link, for example.

Mark drew the names and posted it to youtube, (you can watch them here)  He had the players in one bowl and the teams in the other : it was the fairest way we could think of and you’ll just have to trust that I didn’t cheat. The camera died just as I finished the first draw, cutting off the final name. Here’s who is paired with each team, in alphabetical order. And yes, He was aware that he looks stupid while doing this but was trying not to look in the bowl.

The competition is now live so go and find the beers! The deadline is the day of the World Cup Final : Sunday 11th July : and you need to have posted on or by then. Good luck (especially those with North Korea, Paraguay, Honduras and Ghana!).