Last week I joined my dad on their yearly institute brewery trip, over the years we have been to loads of different breweries and this year was a new one for me, one I had wanted to have a nose round for quite a while as we get quite a lot of their beers up here both on cask and in bottle. 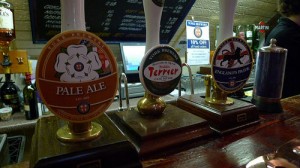 Just some of the york ales on offer

We arrived at the York Brewery Tap to find the other party had been delayed so we were given our complimentary drinks vouchers, which come in the form of 2 tickets for half pint’s, the idea being you can try two different beers.

The tap pub was a lovely loft style bar with open beams decorated with brew memorabilia and a range of empty bottles from around the world, There was a nice mix of bar stools, comfy chairs and sofas along with a few tables to gather around, a little brew shop lurked at the back ethe room too, selling everything from bottled beers to hessian shopping bags branded with the York Brewery logo. I wish I’d remembered about the bar when we did our pub crawl round York last year.

From what I remember of the tour the brewery is almost exactly 14 years old after the building was converted from a motorcycle shop.  I can’t remember the capaticy of the brewhouse but they did say they were running it at maximum output so were looking to expand, they also mentioned that they had recently been taken over by a Lancashire hospitality group so are supplying them with lots of beers and reaching a wider audience becuase of it.

The tour was short and sweet, it was just right, and our tour guide seemed to know his stuff,  we were told about everything from where the hops and malt come from to how to tap a cask of beer, they also told us about they type of casks they have used throughout the years including some rather amusing rubber ones that shot off across the room when hit too hard with a hammer when capping. 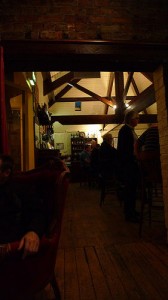 York Brew 4 regular beers all but one of which were avaible on the night, they also had 3 of their seasonal ales on, for review purposes I squeezed some of each.

I started with a Nordic Fury, mainly because everyone seemed to be going for that and I didn’t want it to run out, It was a lovely red colour, which was quite dry and malty with some lovely hop notes.

I then moved onto a Pale Ale which did what it said on the tin, It was lovely and light, with just a hint of fruits, nicely balanced with a good amount of hop character and a lovely bitter finish…very drinkable it was too.

Next up was another of their seasonal ales, England’s Pride, It was darker and maltier than the Pale Ale but it to had a great hop character and hints of ripe berries, It was between this and the Pale Ale for my beer of the night.

This was swiftly followed by a Guzzler, which was the lightest of the beers and If i remember correctly York’s best selling beer, It was light and refreshing but not my favourite beer of the night.

Next up was Yorkshire Terrier which is a decent well balanced bitter, there are hints of hops in there that mingle well with the malt the finish is quite dry and grassy, pretty tasty stuff but not as tasty as I remembered.

I just had enough time to squeeze in a quick Centurions Ghost before we left, this was deep and dark, full of roasty malts , nutty with hints of coffee, great stuff , this would make a great winter evening beer, Luckily I managed to pick up a few bottles from our local bargain shop for £1 a bottle.

The one that was missing was Constantine, I had this when I was last in York but can’t remember but about it apart from it was in possibly the most unfriendly pub I have ever been in.

They are also running a single hop series but didn’t have any around to try, which was a bit of a shame as I would have loved to have given them a go.

Oh he buffet was great too although we could have done with a few more of the lovely local pork pies, the staff were friendly and helpful, despite being bombarded with 30 fellas from around the country so they get a big thumbs up from me. So if you are in York it’s well worth a trip, even if you just visit the tap or one of their brewpubs to try their beer.

You can check out the rest of my pics here