Posted on January 7, 2014 by andyMogg in Beer Stuff, Meet The Brewer No Comments 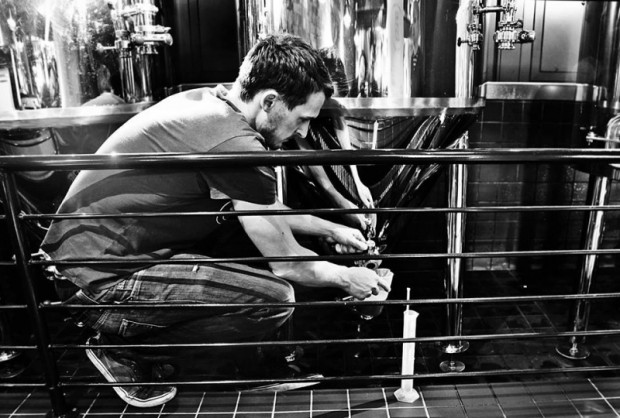 What is your Brewery name and where did it come from?
Tavernale. It’s ale brewed in a tavern. It’s also the name of our house beer brewed for us by Wylam brewery.

What is your brewery capacity?
9 HTL a week.

What is different about your brewery?
It’s brewed in the bar which is pretty neat.

How long have you been brewing for?
Not long. 2 – 3 years. I’ve been in the trade for a bit longer though and am an advanced cask washer for my age.

How did you get into brewing?
It seemed a natural progression to me after working in an ale pub. I applied to hundreds of breweries after being taken on as a part time cask washer at skinners in Cornwall. Allendale brewery took me on and showed me the light.

What beers do you brew regularly?
None. I do a lot of single hop pale ales, and have recently tweaked an Orange IPA I did a while ago.
As the brew kit is so small I’m going to try and never brew the same recipe twice. This has two effects, I learn a lot and people visiting the pub get a very unique pint. Once it’s gone, it’s gone! 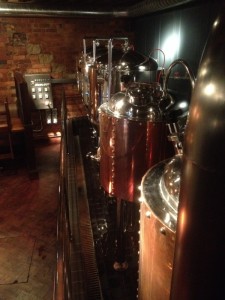 What special/seasonal beers do you brew?
I can’t tell you what i will be brewing each season as i have no idea. Never mind next month. But I can say some that I’ve done. I brewed a maple ale in autumn and a cranberry steam ale for winter. A dark rauchbier went in the pot yesterday. I will be doing some saisons in the summer as it’s been my style of the year. Mmmmmm saison.

Where do you think the future of brewing lies?
I think/hope craft beer will push up people’s expectations of what beer can and should be. More people drinking better beer.

Do you bottle/keg/cask your beer?
Just cask for now. I have some kegs which I will fill occasionally if I have time. Bottling as soon as I can. As it’s just me in the brewery it’s difficult to find the time.

What is your proudest moment in brewing?
Brewing a beer my girlfriend actually liked!

Do you have any brewing regrets?
Many mistakes but no regrets.

What is your brewing ambition?
To brew consistently mind bogglingly  good beer…

I would like work with more creative people, learn, and see where I end up and what the beer tastes like.

What was last beer you drank?
Summer Wine Diablo.

What is your favourite hop and why?
Recently I’ve loved Dr Rudi and Atlas but it’s got to be NS.

What is your favourite beer/food combo?
Pliny the elder and pickled onion crisps.

Do you have a Brewing hero/inspiration?
Not a person per say, just the people in this industry who are pushing it forward.

If you could brew one collaboration beer with someone who would it be with and what would it be?
My friend Neil. We’d brew a mild. 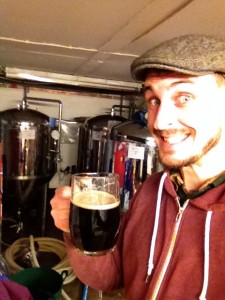 If you could share a pint with someone dead or alive who would it be, what would be the beer and where would you have it?
Rob Maccado… The surfer. A pint of Sauvin Saison on the beach in Hawaii with an offshore wind.

Which beer do you wish you had brewed?
It’s between Beavertown Smog Rocket and Pressure Drop Stokey Brown.

How do you spend your time when you aren’t brewing?
Thinking about brewing.

If you could have one superhero superpower what would it be?
Radioactive man’s radio activity.

Anything else you want to tell us?
I can ski backwards.