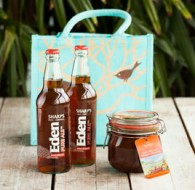 Recently I received an email asking if I’d like to try the new Eden project fathers day gift set which comprised of a lovely little jute bag,  2 bottles of Eden Ale and a huge kilner jar of Eden Ale and Walnut chutney, as it happened we were in Cornwall and planning to call in at the Eden Project for a look around so I got to pick it up after we’d had  a look around the fantastic biomes.

The ale it’s self is 4.4% ABV and brewed by Sharp’s Brewery in Rock, it’s a  lovely clear chestnut/amber colour and pours with a reasonable cream coloured head.

Aromas are sweet caramel and some fruit with a little bit of twang from the hops.  It’s a nice clean slightly malty and nutty beer in the mouth with a hit on vanilla, the malt really is the star of the show but the little hop bitterness means  It’s quite dry which makes for really easy drinking.

The bottle says serve chilled but personally its not a beer I’d want to over chill as I’m not sure it’s robust enough for that.

After opening the first bottle I found my self opening the second and drinking it while reminiscing about our honeymoon which seems like so long ago, that then led to the photos coming out along with more beers I’d picked up in Cornwall which then lead to a late but very enjoyable night.

It’s the sort of beer my dad would love especially with the chutney and a huge slab of cheese.  It’s also a great beer for those just getting into their ale as it’s got enough about it to get people thinking but won’t put people off by being too in their face.

The chutney was nice and sweet without being too sweet, the texture is great, there’s nice big chunks of fruit and plenty of walnuts but still loose enough to spread and not too watery so that it makes everything soggy or drips out of the end of your sandwich. We’ve tried it with just about everything, cold meats, cheddar, blue cheese and even Cornish brie, personally I think it works best smothered onto a thick cut slice of toasted bread topped with melted Blacksticks Blue cheese.

Once emptied (which won’t be long) the jar can be re used, I’ve got a feeling it will either end up full of home-made chutney or some sort of nut mix, oh and the jute bag is now being used by my Mrs to take her lunch to work so not only is the gift pack really tasty it’s recyclable and re usable too.

You can buy the gift pack for £16.50 on the Eden Project website