Stu gave me this bottle of Smokin Oktoberfest way back when I visited him and the Crown Brewery for my brewday and it really has taken me this long to get round to writing about it (sorry Stu),  Another apology must also go out for the picture, I’ve stolen it from Stu’s blog, mainly because as per usual with the bottles I get from Stu they don’t have label’s on and also because i forgot to take a picture of the beer as it was rather lively when I opened it.

Smokin Oktoberfest is  Crown Brewery‘s take on a seasonal Oktoberfest beer so it is only produced once a year and only in small batches. It comes in at 5.7% ABV so I was expecting it to have a fair bit of flavour. 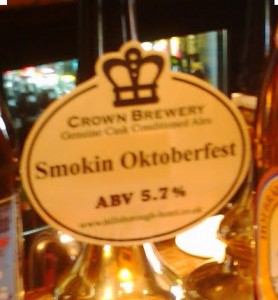 Once I had mopped up the spillage I got to check how the beer had poured, it was a lovely rich dark reddy brown colour with a rather large head, which disappeared as I poured more beer into the glass.

The aromas certainly live up to the smoke in the name, it really does smell of a lovely sweet smoke, like the smoke you get when you BBQ beer soaked meat and the marinade drips onto the hot coals. You also get bags of malt with a hint of booze creeping through, Interesting stuff in deed.

Flavour wise there was a lot of malt which was then bathed in bitter sweet smoke that cleansed the malt away leaving a lovely bitter aftertaste that had just a hint of the smoke that had preceded it. I drank the beer at room temperature and did wonder how the beer would react to being chilled, I have a feeling that this might be one of those beers that may benefit from being slightly chilled and may add another dimension to it, I will report back once I’ve got some more to try it with (this might not be until later in the year though)

Smokin Oktoberfest isn’t a beer I could drink lots of but it is a beer I will drink again, It shows just how diverse the Crown Brewery is and all credit to Stu for coming up with such a splendid beer.