Posted on August 20, 2012 by andyMogg in Meet The Brewer, Old Worthy Brewing Co No Comments 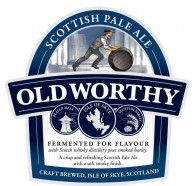 What is your Brewery name and where did it come from?
Old Worthy Brewing Co. I used to work in the scotch whisky industry and the old boys who worked at our distilleries had cracking stories of the
whisky men from another era who mischievously helped themselves to the distillery ‘wash’; a form of ‘beer’ from which new make whisky spirit is
distilled… They got up to all sorts of tomfoolery; stuff you would never get away with these days and I have heard them referred to as ‘local  worthies’ and the name Old Worthy is just a tribute name to those men.

What is your brewery capacity?
We contract brew at Isle of Skye Brewery and I believe they have a 20 barrel brewing capacity.

What is different about your brewery?
As a brewing company we aren’t doing much different from many other brewers… we are focussing on quality and flavour much like everyone else. I would say what really differentiates us is that at the heart of what we are trying to do is to create uniquely Scottish styles of beer and more importantly trying to create a style that is drinkable… You know when guests pick up a Guinness they feel like they are drinking Ireland; just as Mild’s are so strongly associated with England. We are trying to create a beer style that a bloke in Milwaukee can pick up; taste a sip and feel Scotland… and like it… and buy another. Lofty ambitions!

How long have you been brewing for?
I am not a brewer. I have passed my IBD Distilling Certifications but I wouldn’t say I am a distiller either… I am currently working through a Post
Grad at Herriot Watt in Distilling and Brewing via distance learning (albeit very slowly) but essentially I think there are a lot of people out there
with greater brewing skills than I. I am doing this education so that I can understand the jobs that brewers I work with do… and then give educated
feedback. While I would love to be the man at brewing I think my true skills are in setting up the business side of things. Not so sexy I’m afraid.

How did you get into brewing?
I started Old Worthy Brewing Co. when I got laid off by a former employer. I can tell you from what was a really crappy situation the most rewarding aspect of my career has come to life… everything has been up hill from that moment.

What beers do you brew regularly?
At the moment we are focussing on brewing our Old Worthy Scottish Pale Ale. It’s all part of pushing to develop a new Scottish style of ale… SPA lies at the heart of this strategy right now. We are brewing with peated malt barley which has thrown all sorts of challenges into achieving balance and Pam MacRuary has created a mighty fine brew for us… after a lot of testing and back and forth. So because Old Worthy SPA is so different from a lot of other beers from Scotland; I don’t want to dilute our message by making three or four different beers… hence the one beer we brew! I am sure some people will think that’s crazy but I don’t want us to lose focus on what we are trying to do here!

What special/seasonal beers do you brew?
There are a few ideas in the pipeline… I am looking at pushing the peat in new ale formats and also have been doing a lot of research into Scottish
brewing history to see if there is anything that we can gain inspiration from… The book Scotland! By Ronald Pattison has been invaluable… There are some exciting wee prospects but I don’t want to spill the barley just yet!

Where do you think the future of brewing lies?
I think we will see more of the big boys coming into our end of the trade through disguised ‘micro’ brewers… you are starting to see that already. I
am not sure if I am for or against… You know if we all keep showing that there is more to beer than what most people assume then that’s a good thing it doesn’t matter who spreads that message because it is the right one and hopefully works for all of us. I also think we will see more nano and
microbrewers… I just can’t see that letting up right now… One trend I want to see disappear from beer is this ‘beer is the new wine’ nonsense… for me beer is beer you don’t need to mess with it… I would hate to see it transformed into the snobby world of elite wine… swirl, sniff and spit. I don’t think so!

Do you bottle/keg/cask your beer?
Bottle and cask.

What is you proudest moment in brewing?
Seeing people in Sweden actually buy Old Worthy and also say nice things about us online. We’ve just started sales now… and if felt so awesome to see people just enjoying what we have spent a long time pulling together!

Do you have any brewing regrets?
Not yet!

What is your brewing ambition?
To get Old Worthy as the sponsor for the Scottish Rugby team! I’m not joking!

If we get that far I know we’ve made it! We’ve made a beer that the nation loves!!!

What was last beer you drank?
A pint of Proper Job IPA with my girl and a couple of lads from Spendrups! It’s a favourite of mine! And she bought the pint which made it taste even better!

What is your favourite hop and why?
Amarillo! Orange citrus madness!

What is your favourite beer/food combo?
Old Worthy Scottish Pale Ale and Talisker 10 Year Old… I am choosing whisky as a food in this question!

Do you have a Brewing hero/inspiration?
My old man! I am doing these beers for him… He is my bench mark. If he likes the beers then I can pat myself on the back. Job done!

The lads from Mikkeler! I LOVE their beers and their passion. It would be cool to do some crazy Smoked IPA!

Which beer do you wish you had brewed?
Nothing yet!

How do you spend your time when you aren’t brewing?
I play lacrosse! So yip when I am not at work then usually that’s what I am doing.

If you could have one superhero superpower what would it be?
You know Nightcrawler from the X Men? I would totally take his mad teleportation skills. I get sick of the time wasted in travelling… And it would make it a lot easier to pop home to NZ and visit Mum and Dad.

Thank you for the opportunity to talk to you! Really appreciate a chance to talk about what we are doing!