Dead or Alive is brewed by Roosters as part of their experimental arm, “Outlaw”. I am quite a big fan of Roosters as we see their beers around here quite a lot, nearly always on cask…in fact until I went to Beer Ritz in Leeds I hadn’t seen Roosters beer in bottles.

When Zak explained about the beer to me I thought it sounded great  so I parted with around £8 of my hard earned cash. So what did I get for my £8, firstly it’s a 750ml champagne bottle of 5% IPA, that has been lovingly hand bottled then carefully wrapped in a 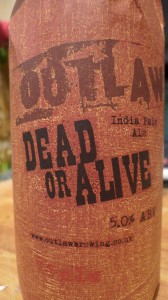 big sheet of specially made newspaper. Each bottle is individually numbered and has a hand written bottling date on. On the back of the paper there was all manner of news and info along with a crossword, so not only do you get a huge bottle of beer you get some entertainment too.

After carefully unwrapping the bottle the time had come to open it up, I noticed that it didn’t have a champagne cork like i was expecting but a crown cap with a rubber bung on the bottom, this should have probably alerted me to what was about to happen. As I removed the cap there was a huge pop, I quickly reached for the glass but 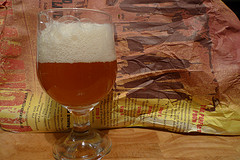 it was too late, the beer was foaming all over the worktop (and yes I did slurp it up).

I let the beer settle while I wiped the rest of the worktop down then I very carefully poured a couple of glasses. The head was still huge and frothy but the beer smelled great, There was heaps of grapefruit and passion fruit along with unmistakable hops and a slight champagne smell.

Flavour wise Wanted Dead or Alive really delivered, it was packed full of flavour, the grapefruit and passion fruit really came through, washing across your tongue and making it tingle, the hops then joined the fun and left a lovely bitter twang on your tongue as you swallowed the pale golden nectar. It was really rather delicious, as it turns out it was a little bit too bitter for Emily, whom I was sharing it with so I had to drink the rest myself, it’s just as well it was only 5%ABV else things may have got a little messy.

As Wanted Dead or Alive was Limited Edition, I am not sure you will be able to get it anymore, but if you do see it, don’t look at the price tag just buy it. It really is one of those beers you should try. 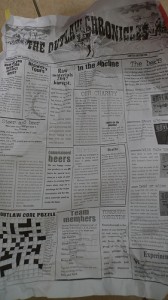