A couple of weeks ago now (I have no idea where the time went) I woke up on the Mark’s living room floor, still feeling a little woosy and wondering where the almighty racket of the seagulls that Mark had warned me about was, if he thinks they were loud he wants to come and spend the day up on the North East Coast, our seagulls are huge, this was the day after the Great British beer festival (clicky for my thoughts on that).

We started the as every post beer all day drinking session should be started with a huge fryup, this came courtesy of Weatherspoons in Tonbridge, to be fair they had some great looking ales on but it was just that bit early. The breakfast was huge and delicious, the bacon was cooked perfectly and had just the right amount of smoky sweetness, everything else was just right too. We left absolutely stuffed and headed back to the bright lights of London. 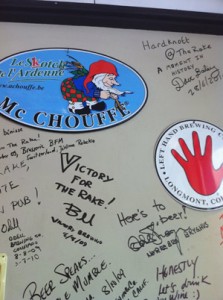 The brewer's wall of fame at The Rake

The first port of call was the London Market Porter, where Robsterowski was waiting, It was a lovely little pub with a great range of beers, unfortunately the couple that could have tempted me into starting drinking again weren’t on so we let Rob finish his pint and headed for the Rake.

The Rake is one of many London pubs that I’ve heard lots about from various sources, Glyn even filled in our meet the publican thing a while back.

It’s a great little place, little in sense of space but not in beer selection, the range was pretty huge in fact. They had a great selection of casks, kegs and bottles ranging from 4% session bitters all the way up to high ABV barley wines, which included the last cask of Thomas Hardy’s Ale. Unfortunately I was still feeling a little worse for wear, luckily Glyn had the solution in the shape of a lovely ginger beer, I can’t for the life of me remember what it was but it was full of ginger and quite spicy, it certainly did the trick. This put me back in the mood and I moved onto a Goose Island Pale Ale. In the meantime Mark had gone off to be interviewed for a youtube channel, Steve from Ale Talk arrived as did a few other people from the beer blogging world. I had a great time chatting with everyone and the Rake is certainly a place I will be visiting again, thanks to Glyn and the staff for their hospitality.

Conscious that I had to be on the train in a few hours and we had lots of other pubs to fit in we headed across to Brew Wharf as I wanted to try some of Saint’s and Sinners beers, as I had only ever had a couple of bottles that Phil had very kindly sent me. I plumped for ABC which was their low ABV beer at only 3%, it’s packed full of flavour and is simply delicious, the hops are huge and fresh, the beer is light and extremely drinkable with an astonishingly clean bitterness that gives it a really crisp finish, the only shame was that it came in  a quilmes glass, Hats off to Phil and Steve for living up to the hype, something that I’m finding that more and more beers fail to do. (I also had a sip of “Hopfather” which was another cracker). 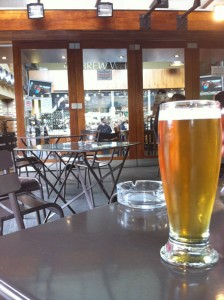 It’s also great to be able to see the brewery while you are supping your drink, more places really do need to be like this, I bet its a fascinating thing on brewday to watch the guys whizzing around working their magic, It just so happens the seats we chose were near the kitchen too and the food I saw going out looked rather tasty, unfortunately we didn’t have time to eat as we needed to be across the other side of town for a beer in another place I had heard lots about, The Cask & Kitchen.

After a short tube journey and a little walk we were inside, greeted by a huge row of pumps and a massive fridge of bottles, again like the Rake ranging from pilsners and session bitters all the way up to crazy off the wall beers like Mikkeller Black Hole and Brewdog Sink The Bismarck. I soon spotted the Thornbridge/Odell Collaboration beer, Columbus Red, It came out of the pump a glorious deep dark coppery red colour with a huge head, The aromas was packed full of hops and malt, the taste was huge,nutty,malty, sweet and  fruity with a huge hit of hops to balance it all out. It was a huge beer. It was then I realised this would be my last beer in London as I needed to head for the train, what a way to end though..what a cracking beer.

Once safely back on the train I had time to reminisce about the last couple of days, I was knackered and skint but had a great time, London for the most part lived up to the hype, despite being really busy, humid and turning my snot black.

London – I will be back to sample more of your delights!

4 comments on “A whirl wind pub trip round London.”