Posted on December 3, 2010 by andyMogg in Meet The Brewer, Summer Wine Brewery 3 Comments

This weeks Meet the brewer comes from home of Last of the Summer wine, a true British Classic and from two guys who after spending a few hours gettting twissed and sharing a monster curry,

They were a great laugh, their passion and knowledge came across in bucket loads and I’ve got a feeling they are one to watch in 2011. I for one will be searching out some of their beers. 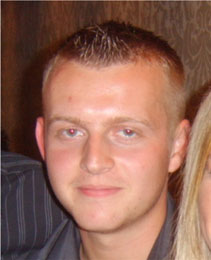 What is your brewery capacity?
1,560 brewers barrels per year.

What is different about your brewery?
We may have a quintessential Yorkshire name in Summer Wine Brewery but the ethos & ideals behind the brewery are very contemporary, we brew classical & evolutionary craft beers in cask, keg & bottle. We very much intend to be a part of the exciting craft beer scene in the UK in the coming years. We have some very exciting projects in the pipeline especially for 2011 when you will see SWB beers more widely available in 330ml bottles.

How did you get into brewing?
I started home brewing & my hobby slowly became my life, I love beer, I love the variety beer can offer. I love how it brings people together & most of all I love the people in this industry.

What special/seasonal beers do you brew?
2010 Saw the very successful â€˜Project 6′ where we brewed Six 6.6% IPA’s.
2011 will see us brew two monthly pale specials ranging from 3.6% – 4.3%.
The â€˜Nerotype’ Black IPA series.
A monthly experimental brew.
A monthly extreme beer.

Where do you think the future of brewing lies?
In the hands of those willing to innovate & push the boundaries of style & strength. I believe brewing beers that are packed full of flavour but yet balanced is an art form. I believe the future lies with the brewers who can do all of these. I think the UK beer scene needs to collectively â€˜up’ it’s game, with beers, brand etc. BrewDog are a shining example of what can be done if you get it right & I respect their achievements.

What is your proudest moment in brewing?
We’ve won awards but nothing compares to being told by someone with a pint of your beer in their hand that it’s gorgeous.
I’m always proud when licensees tell you they buy your beer because the punters can’t get enough of it, it never fails to make me smile.
I’m sure there will be a lot of moments to enjoy in the coming few years, but it’s time to knuckle down & brew some great cutting edge beers.

Do you have any brewing regrets?
Nope.

What is your brewing ambition?
To brew flavour packed, balanced craft beers that people really love.

What was last beer you drank?
BrewDog Hardcore IPA, stunning!

What is your favourite hop?
Chinook, but Citra is on the wayâ€¦

Do you have a Brewing hero/inspiration?
Drinking amazing craft beer inspires me.

Which beer do you wish you had brewed?
Thornbridge Bracia.

If you could have one superhero superpower what would it be?
To make every single average bland cardboard beer drinker think twice about what they pour down their neck.

Anything else you want to tell us?
Keep your eyes peeled in 2011 for our new exciting bottled beer range in 330ml bottles it will include â€˜Heretic’ Imperial Black IPA 7.2%, Diablo IPA 6.0% & Teleporter Export Strength 6.5% amongst other limited releases.

If there’s any licensees interested we will shortly have Key Kegs available alongside our cask offerings.

A thank you to every beer blogger, you are doing wonders for the profile of craft beer in the UK & the world for that matter, keep up the great work!

Thanks to James for filling this in you can repay him buy buying his beer, following him on  Twitter, Read the summer wine blog or visit their website