Way back in September I was sent these two bottles of Westmalle beer, One Tripel and one Dubbel, I decided the best way to tackle them would be one after the other.

For those of you who haven’t heard of Westmalle it is brewed in a Trappist Abbey in Belgium, from what I have heard it’s only a small place and only brew’s 3 types of beer – Tripel, Dubbel and Extra, according to their website:

The Tripel and Dubbel are offered commercially: these beers are available in the horeca sector, large distribution chains, specialised shops and beer traders in Belgium and the Netherlands*, and at a number of selected places throughout the world. The Extra is only brewed twice per year and is only for internal use: the monks and guests of the abbey drink this beer at lunch.

Also according to their website both the Tripel and Dubbel are living beers, the taste of which depends on the age, storage and serving method, you can read more about this here – after reading it I am quite tempted to get another couple of bottles to age, unfortunately I don’t have the patience. 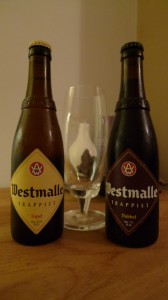 Anyway enough of my waffle and onto how the beer tastes, I started with the Dubbel, even though it was darker it was the weaker ABV coming in at 7% so it kind of made sense to start there.

I didn’t have a proper Westmalle glass and was feeling too lazy to go and find one of my Trappist style glasses so I decided to use my stemmed pilsner glass. hopefully the monks won’t mind too much.

The double poured with a lovely dark, deep brown with a caramel coloured head, it was quite lively and I very nearly over poured it.

The aromas are very yeasty, almost like under cooked bread (but in a nice way), It has a lovely mouth feel and it’s packed with flavour, It’s quite malty with a few herbs and spices in there and just a hint of sweetness, it was rather delicious. I had soon supped it without really noticing, so it was time to open the Tripel.

The Tripel weighs in at an rather hefty 9.5% but is a lot lighter in colour than the Dubbel and pours a lovely golden yellow colour, again the head was huge and it gave off some really strong smells.

The yeasty smell that was present with the Dubbel was there but with a huge hit of alcohol a hint of hops and a little bit floral.

The first thing that hits you when you taste it is the alcohol, you really know it is present in the Tripel, you then get a little bit of floral hop and some spice finished off with a little bit of sweetness and then the alcohol again.

I don’t think the Tripel has as much flavour as the Dubbel and the boozy flavour is a bit to predominant, it’s a nice beer just not as nice as the Dubbel.

One other thing, I really like the bottles, the little ring around the neck is a bit different and the labels are nice and simple!

If you want to give Westmalle beers a go they are available in Oddbins and retail at £2.29 for the Dubbel and £2.69 for the Tripel, which in my humble opinion is a bit of a bargain.